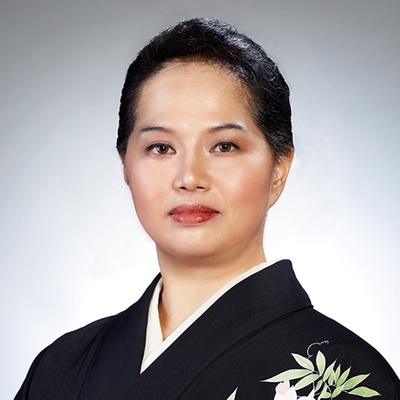 Yoshinojo Fujima (aka Rika Lin) is “shin-nisei,” part of the postwar Japanese American diaspora. She is an interdisciplinary artist, choreographer, and Grandmaster in Fujima style Japanese classical dance. She has performed her original works and as part of many collaborations at Links Hall, the Chicago Cultural Center, the Pritzker Pavilion in Millennium Park, and the Museum of Contemporary Art (MCA), where she premiered her full-length work “Asobi: Playing within Time” in 2018. A core member of the organization, Asian Improv aRts Midwest, she promotes identity and tradition through performance as well as her teaching practice in Japanese classical dance. She is a Fellow in Residence at High Concept Labs (2021), is a recipient of a John D. and Susan P. Diekman Fellowship at the Djerassi Resident Artists Program (2019), has received other residencies and awards, including Ragdale Foundation (2019), High Concept Labs (2018), Links Hall Artistic Associate Curatorial Residency, 3Arts Make a Wave grant (2017), and Chicago Dancemakers Forum Lab Artist award (2017).

Yoshinojo’s curated series “Beyond the Box,” launched in 2017, centers on female performers and creatives. Her own dance investigations alter the traditional pedagogy of Japanese dance with humor and subtle transgressions by way of questioning ideas of role and identity. Her collaborative project, “Suji: Lines of Tradition,” with the puppet artist Tom Lee was featured in the 2019 Chicago International Puppet Theater Festival, Links Hall’s 40th Anniversary “LinkSirkus”, as well as in her “Beyond the Box” series. In March 2020, she performed in Kyoto, Japan at UrbanGuild as part of the MushiHime Festival just before the pandemic came into full force. She is a recent Master Apprentice Ethnic Folk Arts Grant recipient and is adapting the pedagogy of traditional Japanese Classical dance with her mentor/teacher.

Yoshinojo Fujima has crowd-funded a project with 3AP