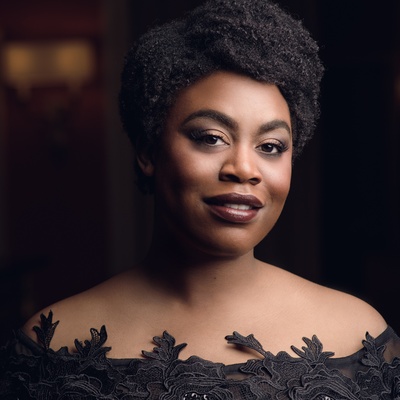 Rising star Whitney Morrison has earned praise for her “big, gleaming soprano” (Chicago Classical Review) and “vocally sumptuous” performances (Chicago Tribune). A Chicago native and recent alum of the Ryan Opera Center at Lyric Opera of Chicago, Morrison champions an African American aesthetic in classical music, embracing a style of performance that blends classical singing technique with elements of gospel singing tradition. Opera News writes about her most recent performance in the Lyric Opera of Chicago’s virtual concert, Lawrence Brownlee and Friends: The Next Chapter: “Whitney Morrison was simply astonishing in everything she sang...This is a voice we need to hear live.”

Morrison’s future engagements include singing the role of Betty/Louise in X—The Life and Times of Malcolm X at Michigan Opera Theater and singing the music of Jessie Montgomery in The Chicago Symphony Orchestra's MusicNOW series. She was engaged earlier in 2021 covering Billie in the premiere of Fire Shut Up in My Bones at the Metropolitan Opera in New York City.