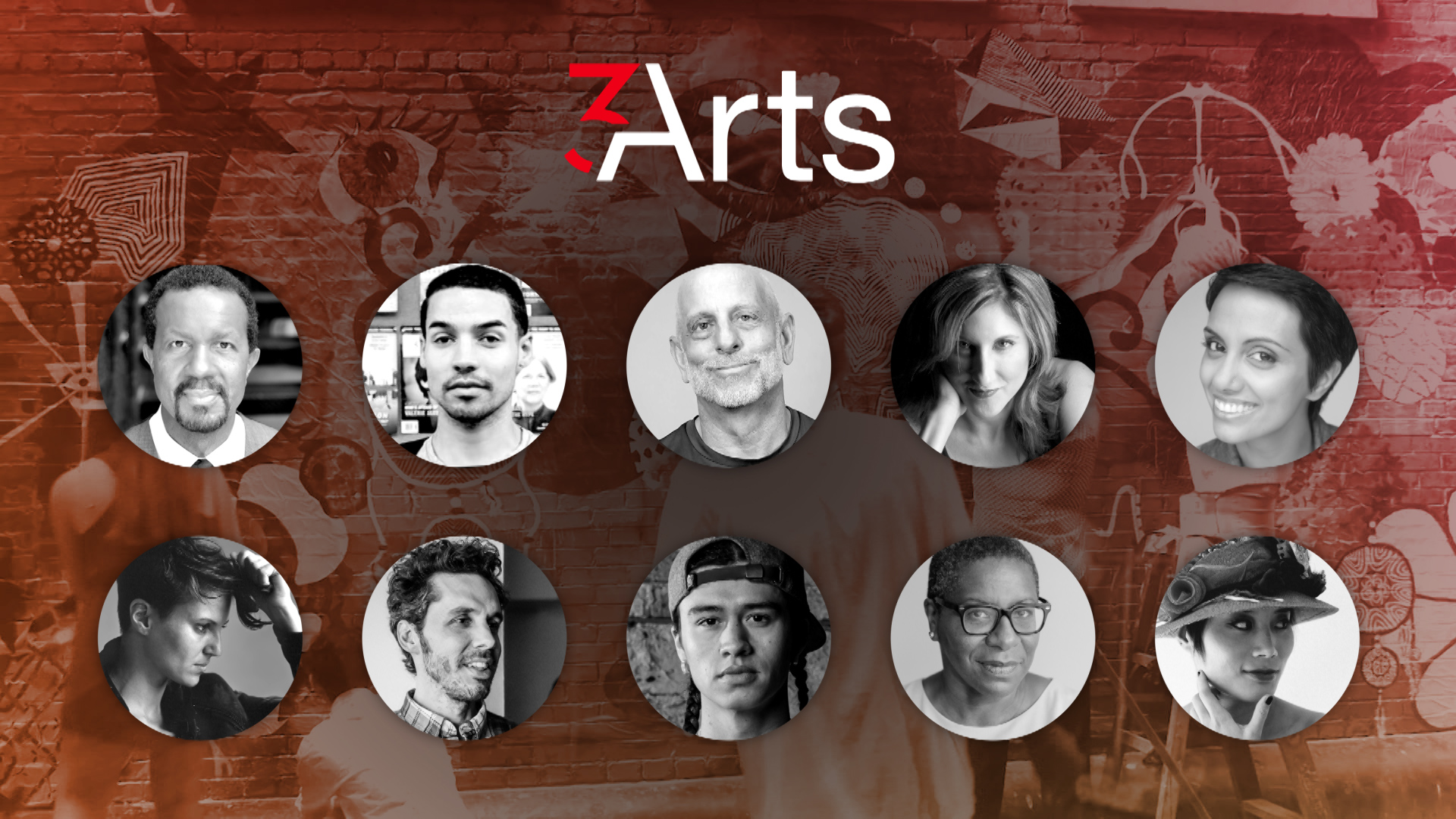 CHICAGO, IL (October 5, 2015)–3Arts is honored to announce the ten recipients of its 8th annual 3Arts Awards, presented to women artists, artists of color, and artists with disabilities working in the performing, teaching, and visual arts. The 2015 recipients are: dancer Kris Lenzo and choreographer Stephanie Martinez; vocalist Frank Waln and instrumentalist Chihsuan Yang; teaching artists Benji Hart and Chris Silva; actors Allen Gilmore and Fawzia Mirza; and visual artists Cheryl Pope and Fo Wilson. 3Arts Awards honorees each receive an unrestricted $25,000 award to put to use according to their individual needs and priorities. To date, the Chicago-based, nonprofit granting organization 3Arts has awarded over $1.5 million in total grants to more than 100 Chicago artists in the past eight years.

The 3Arts awards were presented on Monday, Octover 5, by the 3Arts Board of Directors and Awards Host Committee in a celebratory gathering at the Museum of Contemporary Art. The event also featured the world premieres of the dance, “Flexing/Fluffing,” by past 3Arts awardee Darrell Jones as well as the music composition, “Pretty Ugly,” by past awardee JoVia Armstrong and performed by an ensemble of past awardees including Dee Alexander, Tatsu Aoki, Nicole Mitchell and avery r. young.

“It is an immense privilege for 3Arts and our Award Partners to support another ten Chicago-area artists whose work energizes and enthralls every corner of our city. It is our profound hope that these artists will feel the applause emanating their way, and never forget how much they are valued here,” said 3Arts Executive Director Esther Grisham Grimm.

“Every year, we celebrate new awardees who reflect the breadth of art in Chicago and the diversity of our community. Hand in hand with our supporters, we do this work, in part, selfishly—to ensure that artists have a good reason to stay among us in Chicago,” added 3Arts Board Chair Marcia Festen.

The ten awardees were selected by national jury panels of their peers, including:

The recipients of the 2015 3Arts Awards are:

Kris Lenzo made the transition to dance after more than two decades as a wheelchair athlete and a national champion in wheelchair basketball and wheelchair track. Since 2003, Lenzo has danced with MOMENTA performing arts. His appearances include Spring to Dance, Dance Chicago, Duets for My Valentine, Bodies of Work Festival of Disability Art and Culture, Counter Balance I-VI, and annually at the Chicago Disability Pride Parade.

Frank Waln is an award-winning Sicangu Lakota Hip Hop artist, producer, and performer originally from the Rosebud Reservation in South Dakota. A graduate of Columbia College Chicago's Audio Arts and Acoustics program, he has subsequently won three Native American Music Awards, the "Native American 40 Under 40" award from the National Center for American Indian Enterprise Development, and the 2014 Chicago Mayor's Award for Civic Engagement.

Chihsuan Yang is an eclectic and versatile violinist actively engaged in the Chicago music scene. She began playing violin, piano, and erhu at an early age in her native country, Taiwan, and holds a bachelor degree in violin performance. Yang performs in a wide array of genres, including classical, blues, flamenco, free-improvisation, rock, electronic-acoustic, and world music. She is a member of the legendary Corky Siegel's Chamber Blues, as well as the classical quintet, "Accende," and the flamenco ensemble, Las Guitarras de Espana.

Benji Hart is an activist, artist, and youth worker dedicated to radical education. Much of his work focuses on using the dance form of vogue to teach Black and Brown queer history, sex positivity, and prison abolition, and to empower poor and working queer communities in creative and celebratory ways. Currently he is a drop-in worker at the Broadway Youth Center in Chicago, a community space for trans and queer youth experiencing homelessness.

Chris Silva has been a prominent figure in Chicago's graffiti and skateboarding scenes since the 1980s and has played a significant role in the development of "street art." In the 90s, he worked on a mural with the Chicago Public Art Group as part of a community youth project. Since then, the act of facilitating art experiences for young people has become an important part of his art practice. Silva has helped orchestrate youth art projects with Young Chicago Authors, Gallery 37, Yollocalli Arts Reach, After School Matters, and others.

Allen Gilmore trained as an actor with Stella Adler at New York University and is a graduate of Juilliard. He has played a variety of roles during his career including: both Othello and Iago (Othello), Cyrano (Cyrano de Bergerac), Ichabod Crane (The Tales of Washington Irving), Hamm (Endgame), Brutus (Julius Caesar), Bynum (Joe Turner's Come and Gone), Lun Tha (The King and I), Ebenezer Scrooge (A Christmas Carol), Mme. Arsinoe (The Misanthrope), King Hedley (Seven Guitars), and Vladimir (Waiting for Godot) among many others.

Fawzia Mirza is an actor, comedian, and writer who believes in dispelling the myth of the "model minority" in mainstream media and in the power of comedy to tackle divisive topics. She has performed on various Chicago stages and on television and film. Her one-woman play, Me, My Mom & Sharmila, has been performed at universities, conferences, and festivals across the country and internationally. She has also produced documentaries, including the award-winning Fish Out of Water, and Reclaiming Pakistan.

The 3Arts Community Award is funded in part through a 3AP crowdfunding campaign. A third of the prize is provided by 3Arts while the remaining comes from 94 donors throughout Chicagoland.

Cheryl Pope is a visual artist working in sculpture, installation, and performance. Her work questions and responds to issues of identity as it relates to the individual and the community, specifically in regards to race, gender, class, history, power, and place. Her project JUST YELL / POETRY as SELF DEFENSE focuses on the physicality and embodiment of language, the politics of listening, and connecting community.

Fo Wilson is an artist/maker, educator, independent curator, and writer. Her studio work uses constructed space and furniture forms to create experiences that reposition historical objects and/or aesthetics in a contemporary context and offers audiences new ways of thinking about and interacting with history. Her solo exhibition, Eliza's Peculiar Cabinet of Curiosities, will open at the Lynden Sculpture Garden in Milwaukee, Wisconsin in 2016.

Driven by the belief that the vitality and creative spirit of Chicago is reliant upon a diverse spectrum of artistic voices, 3Arts advocates for women artists, artists of color and artists with disabilities working in the performing (dance, music and theater), teaching and visual arts.