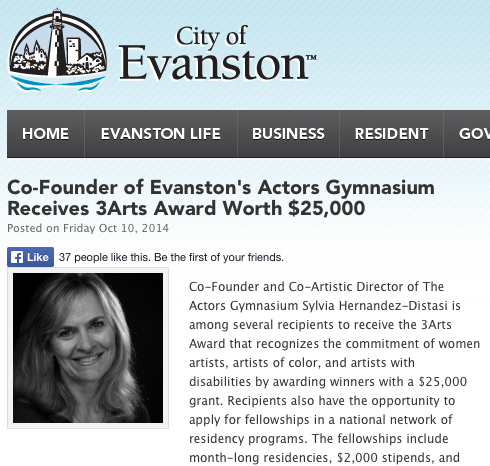 Co-Founder and Co-Artistic Director of The Actors Gymnasium Sylvia Hernandez-Distasi is among several recipients to receive the 3Arts Award that recognizes the commitment of women artists, artists of color, and artists with disabilities by awarding winners with a $25,000 grant. Recipients also have the opportunity to apply for fellowships in a national network of residency programs. The fellowships include month-long residencies, $2,000 stipends, and airfare.

Hernandez-DiStasi is a second-generation circus performer who grew up touring with various circuses across the country. Highlights of her performing career include a three-year tour with the Ringling Brothers and Barnum & Bailey Circus and competing in the Circus World Championships in London. In 1990, Sylvia moved to Chicago, where she began teaching and choreographing circus arts. After working with Lookingglass Theatre Company she earned three Joseph Jefferson Awards for her circus choreography in The Baron in The Trees (1999),Hard Times (2002), and Lookingglass Alice (2005).

Currently Hernandez-DiStasi works at The Actors Gymnasium in Evanston, where she enjoys splitting her time as a circus teacher, act creator, and choreographer for circus productions such as Lost and Found: A Recycled Circus; Skooled; andThe Magical Exploding Boy and The Invisible Circus.

Driven by the belief that the vitality and creative spirit of Chicago is reliant upon a diverse spectrum of artistic voices, 3Arts advocates for women artists, artists of color, and artists with disabilities working in the performing (dance, music and theater), teaching, and visual arts. For more information on 3Arts and to view the complete list of recipients, please visit 3arts.org.