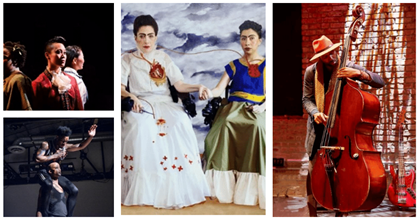 3Arts awards nearly half a million dollars to Chicago’s women artists, artists of color, and d/Deaf and disabled artists

CHICAGO, IL (October 5, 2020)–3Arts, the Chicago-based nonprofit grantmaking organization, will award Chicago artists with nearly half a million dollars in unrestricted grants at the 13th annual 3Arts Awards Celebration, taking place Monday, October 19 via livestream on YouTube. The celebration will honor ten 3Arts Awards recipients with $25,000 cash grants, and ten additional artists with $2,000 cash grants through Make a Wave. An additional $200,000 in new and expanded funding will also be announced during the 3Arts Awards Celebration—making this the largest award year in 3Arts’ history. The virtual event is free to the public and features 15 commissioned performances by past 3Arts awardees. Registration is required at https://3arts.org/event/.

Since 2007, 3Arts has supported 1,100 artists—representing 70% women artists, 70% artists of color, and 10% artists with disabilities—and distributed $4.3 million through direct grants. By providing cash awards, project funding, residency fellowships, professional development, and promotion, 3Arts helps artists take risks, experiment, and build momentum in their careers. At the October 19 celebration, 3Arts’ Executive Director Esther Grisham Grimm will share surprise announcements about how the organization will be supporting artists more than ever this year.

“This year, when many artists have lost their livelihoods virtually overnight, we believe strongly that it is not time to pull back; it’s time to give more, do more, advocate more, and invest more in the well-being of our city and its artists,” said Esther Grisham Grimm. “While we wish we could celebrate our 2020 awardees in person, a virtual event means we can invite the public, free of charge, to meet and enjoy performances by some of Chicago’s most talented creative practitioners. The event is being fashioned as a kind of love letter to Chicago artists, with a goal of sending joy and hope into our city and the artists who power it.”

To elevate this year’s awards, 3Arts commissioned 15 artists to create three new works for the event, including:

2019 awardee Sam Trump (trumpet player, singer) who will debut the World Premiere of his music video, “New World”; 2012 awardee Nejla Yatkin who digitally choreographed a dynamic “exquisite-corpse-style” score for dancers, actors, and musicians—each representing the past 12 years of awardees; and 2019 awardee Santiago X, who will present a piece to honor Native lands.

Meet the recipients of the 2020 3Arts Awards:

Keyierra Collins is a dancer, teaching artist, and choreographer. Collins earned a BA in Dance from Columbia College Chicago where she studied various dance forms including West African, modern, jazz, ballet, hip-hop, and improvisation. As a dance artist, Collins has collaborated with several choreographers including Onye Ozuzu, Paige Cunningham, Margi Cole, Emily Stein, Anna Martine Whitehead, Dorothée Munyaneza, and Sonita Surratt, to name a few. As a choreographer, Collins explores how dance and movement can be used to heal trauma, particularly the collective and individual trauma experienced by people of the African diaspora. Having toured and worked with artists in Haiti and Nigeria, Collins wants to continue to travel and collaborate with artists around the world.

Meagan L. McNeal is a powerhouse singer, songwriter, and recording artist. Well-versed in the genres of soul, jazz, and R&B, she is known for her diverse range and soulful voice. Since embarking on her journey in 2008, McNeal went on to perform throughout the USA and across the globe. With a fervent drive and dedication, she was a backing vocalist for world-famous artists like Eminem, Common, and The O’Jays. Her energetic stage presence was embraced by audiences large and small. She attracted attention on the local circuit and received international acclaim with the release of her debut album, Mindset, in 2013. Gracing the stage of NBC’s The Voice in 2017, McNeal’s radiating vocals landed her on the team of Grammy Award-winning artist Jennifer Hudson. Those experiences lend themselves to her refined versatility and signature vocal style. In 2019, she released the song, "Roses," a haunting call to action that urges listeners to not wait another minute to live fully and give their love and gifts while they can. Her music effortlessly transcends boundaries and spreads messages of unapologetic, universal truth.

Luis Álvaro Sahagun Nuño was born in Guadalajara, Mexico in 1982. His grandfather came to the United States in the 1940s under the Bracero Program, working in Chicago Heights’ steel industry. His parents found work in the fields in the late 1970s, and Nuño was brought to this country in 1985, living undocumented until naturalized in 1995 under Reagan’s Immigration Reform and Control Act. As a teaching artist with a socially engaged art practice, Nuño cultivates sacred spaces and artful experiences for students in Chicago Public Schools, universities, and museums. He is a resilient ambassador, empathetic mentor, and compassionate teacher working to empower youth and create lasting social change throughout Chicago. His work as a visual artist has been exhibited at venues including the Chicago Cultural Center; Museum of Contemporary Art, Chicago; The National Museum of Mexican Art; DePaul Art Museum; and EXPO Chicago; among many others. He received his undergraduate degree from Southern Illinois University-Carbondale and an MFA from Northern Illinois University.

Dorian Sylvain is a painter whose color and texture explore ornamentation, pattern, and design as identifiers of cultural and historical foundations. She is a studio painter and muralist, as well as an art educator, curator, and community planner. Much of her public work addresses issues of beautification inspired by color palettes and patterns found throughout the African diaspora, particularly architecture. Core to her practice is collaborating with children and communities to elevate neighborhood aesthetics and foster shared understanding. In addition to commissioned studio and mural work, Sylvain has led public art projects over the past four decades that empower community and expose children to artmaking. Partnering with such organizations as the South Side Community Art Center, Hyde Park Art Center, National Museum of Mexican Art, DuSable Museum of African American History, Chicago Park District, and the Chicago Public Arts Group, she has devoted her work to building the next generation of “cultural keepers.”

Emjoy Gavino is an actor, casting director, teaching artist, and producer proud to call Chicago her home. Her Chicago acting credits include A Red Orchid Theatre, Steppenwolf Theatre Company, Court Theater, About Face Theatre, The Hypocrites, The Second City, House Theatre, Northlight Theatre, Remy Bumppo, Victory Gardens Theatre, Paramount Theatre, The Broadway Playhouse, Lookingglass Theatre Company, The Neo-Futurists, The Goodman Theatre, and The Gift Theatre, where she is the casting director and an associate artistic director. She is a 2017 3Arts Make a Wave grantee and the founder and training series producer of The Chicago Inclusion Project, through which she has cast for American Theater Company, The Hypocrites, Circle Up (Jackalope Theatre), and In the Works (Theater on the Lake). She is represented by Stewart Talent.

Sydney Lynne Thomas is a Chicago-based designer from Dallas, Texas who has been a practicing artist for 10 years. Her breadth of work includes scenic design, workshops, painting, sculpture, installation, photography, community organizing, and building. Beginning with a background in visual arts, Thomas explored a variety of visual and mixed media arts before transitioning into the field of scenic design. She has designed or collaborated on more than 50 theatrical projects. An ongoing focus of her work is to continue artistic explorations through curating/creating safe, accessible, engaging physical spaces with a mind towards community and collaboration. She also continues to better investigate and understand interconnectivity through the frameworks of sustainability and technology, especially in relationship to developing and facilitating youth platforms. She was nominated in 2020 for a Non-Equity Jeff Award in Scenic Design. She is a graduate of Northwestern University, studying theatrical design/production.

Born and raised in “DC proper,” A.J. McClenon studied art and creative writing at the University of Maryland and The New School prior to receiving a Master of Fine Arts from the School of the Art Institute of Chicago in 2014. Alongside artistic experiences, McClenon is passionate about teaching and community collaborations with the goal that all the memories and histories that are said to have “too many Black people” are told and retold again. To uphold these stories, McClenon creates performances, installations, objects, sounds, visuals, and writings. These creations often revolve around an interest in water and aquatic life, escapism, Blackness, science, grief, US history, and the global future. McClenon is deeply invested in leveling the hierarchies of truth and using personal narrative to speak on political and cultural amnesia and their absurdities.

Reveca Torres was paralyzed in a car accident as a teenager. After completing degrees in Fashion Design and Theater Arts, she worked simultaneously as a costume designer and with various organizations doing disability work in health, advocacy, recreation, and peer support. She started a nonprofit called BACKBONES after realizing that years of interaction and friendship with others living with spinal injuries (SCI) made a significant impact in her own life. She is co-director of ReelAbilities Film Festival Chicago and has curated touring photography and art exhibitions that showcase work of people with disabilities and bring awareness to disability rights. Torres uses painting, illustration, photography, film, movement, and other media as a form of expression and a tool for advocacy and social justice.

About 3Arts: 3Arts is a nonprofit organization that advocates for Chicago’s women artists, artists of color, and artists with disabilities who work in the performing, teaching, and visual arts. By providing cash awards, project funding, residency fellowships, professional development, and promotion, 3Arts helps artists take risks, experiment, and build momentum in their careers.

3Arts extends a special thanks to 2020 3Arts Awards Presenting Partner, the Walder Foundation, and to the 2020 Award Partners: The Chandler Family; Gary & Denise Gardner Fund; The HMS Fund; Stan Lipkin & Evelyn Appell Lipkin; The Reva & David Logan Foundation; RH, Restoration Hardware; The SIF Fund at the Chicago Community Foundation; Southwest Airlines; and donors to the 2020 3Arts/Southwest Airlines Community Award. One of the ten 3Arts Awards, designated as the Community Award, is named in honor of the Chicago community. Earlier this year the award was supported by 85 donors who contributed to a crowdfunding campaign plus a $15,000 match from Southwest Airlines. This year’s 3Arts/Southwest Airlines Community Award recipient is Dorian Sylvain, an artist and arts educator born and raised on Chicago’s South Side who has been developing community-led public art and mural projects around the city for more than four decades.