With this campaign, I am seeking to adapt one of my latest dance performances into an experimental film that incorporates virtual reality technology and other contemporary interventions in traditional Japanese classical dance. This project, “Kurokami E{m}Urge,” is part of a larger series that revolves around a classical dance piece called “Kurokami,” meaning “black hair.” That traditional piece focuses on the character’s anguish, but as a result, the resilient strength of women is highlighted. Prior to the pandemic, I was working to create a new, live interpretation of this classical work. Shortly before we were ready to debut, we had to adapt to a livestreamed dance performance. While making that adaptation, I became interested in the opportunity that a more ambitious filming and virtual reality (VR) technology may bring to the piece. As a contemporary performer trained in a centuries-old art form, I have a continuing goal to expand the legacy of Japanese works and dance forms by practicing with new performance techniques and modern ideas of identity. For this vision, we have assembled the talents of numerous collaborating artists who span the globe from Mumbai to Kyoto to Chicago. Together, with your help, we will explore this living traditional art form and bring it into the 21st century context to address contemporary ideas of power, the representation of women, and the perception of self.

As a classical piece, “Kurokami” has been performed using Jiuta and Nagauta styles of music, focusing on the woman as the main character. The character has been portrayed in different iconic woman roles of the Edo period, such as a high-level courtesan, a princess, or a geisha. My process involves reshaping and reformulating a traditional idea or concept by transforming each facet of the original work. The three components I typically focus on are the music, the stage, and the performer. The iterations draw upon contemporary applications of music (e.g. electric shamisen, Gidayu shamisen), changes to the stage (a physical theater, a virtual theater, a digital film theater), and portrayals of different elements of a character (different gender, different mentality).

In Japanese culture, black hair is symbolic of a woman’s beauty, sensuality, strength, as well as youth. The song “Kurokami” became famous for being used in the Kabuki play "Oakinai Hirugakojima" that premiered at Nakamura-za in 1784, and was transferred to the Jiuta style of playing, and eventually to the present-day Nagauta song used in Japanese classical dance.

The story follows a samurai’s struggles to revive the Genji clan. The warrior, Minamoto no Yoritomo, falls in love with Tatsuhime, the princess daughter of Sukechika Ito. However, the power of the Kanto samurai is needed to revive the Genji clan. Realizing Yoritomo's feelings of seeking the revival of the clan, Tatsuhime crushes her own feelings and advises Yoritomo to marry another woman, Princess Masako. On the night of Yoritomo and Masako's “first pillow,” Tatsuhime suffers from jealousy and anguish while combing her hair alone. The song "Kurokami" was woven into this now-famous scene, and Tatsuhime’s act of hidden sacrifice and lonely despair over her lost love has been handed down to the present day as a progenitor of enka songs as well as being performed in Japanese classical dance.

With “Kurokami E{m}Urge,” I am embarking on my most adventurous intervention by incorporating a virtual reality form of the piece. The increasing popularity of virtual gaming platforms and systems has accelerated the capacity to allow audiences to access a completely new type of venue and experience. It is “theater with an audience of one.”  This intimacy is an intriguing and stimulating prospect. This iteration, along with the contemporary music and other creative staging, will provoke thought and discovery into ideas of identity, women’s representation, freedom, will, and stretching our capacity for empathy, one person at a time.

Thank you for your support in helping us bring this project to life! 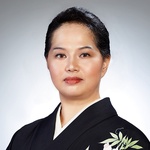 Yoshinojo Fujima (aka Rika Lin) is “shin-nisei,” part of the postwar Japanese American diaspora. She is an interdisciplinary artist, choreographer, and Grandmaster in Fujima style Japanese classical dance. She has performed her original works and as part of many collaborations …