For many, the scale and magnitude of climate change is incomprehensible, leaving us feeling powerless to the imminent crisis. Our project, Requiem: A White Wanderer, uses a creative multi-sensory approach to address this emotional experience and allow us to see, hear, and feel the impact in new ways. As installation artists, we work with light, color, projection, and other materials to explore ideas. For many years, climate change has been one of our most compelling and urgent subjects. For this project we are collaborating with scientists and musicians to create an original performance based on shifting and melting icebergs. Douglas MacAyeal, a glaciologist at the University of Chicago, is providing source data based on the seismic recordings of Iceberg B15. Composer Katherine Young will translate this information into a musical score, which will be played live by an ensemble of musicians. We will design the concert setting, using mirrors and reflected light to create an atmospheric environment for the musicians and the audience. Support for this campaign will enable us to bring some of the best musicians in the country together with artists and scientists to create a dynamic—hopefully catalytic—platform for discussion and action towards combating climate change.

An earlier phase of this project, entitled White Wanderer, was initially inspired by Larsen-C, a 120-mile long crack that formed along the Antarctic ice shelf and broke into a trillion-ton iceberg in 2017. We learned that there were seismic recordings made by glaciologist Douglas MacAyeal, who has been observing and recording the movement and changes in icebergs for several years. The seismic recordings have a low frequency sonic signal that is inaudible to the human ear but can be perceived and felt throughout the ocean system, traveling through deep sea trenches like the “SOFAR” channel from the Antarctic to Haiti and beyond. We were able to connect with MacAyeal and use his data as inspiration in our work.

With support from the Natural Resources Defense Council, in 2017 we launched the project with two iterations: an immersive public installation downtown at 2 Riverfront Plaza and a presentation at the EXPO Chicago art fair. The public installation comprised a visual representation of the 120-mile long crack depicted on the building façade at 1:5000 scale along with a custom sound recording of the iceberg. The result helped to showcase how enormous the scale of climate change is. The New Yorker’s Year in Review featured White Wanderer as one of nine “sounds that defined 2017.” Subsequently, for Earth Day 2018, we were invited to present the soundscape inside the University of Chicago’s Rockefeller Chapel. Hearing the sound in this setting sparked the inspiration to develop this new live piece with a composed score and full ensemble of musicians.
Requiem: A White Wanderer, pushes us in a new realm artistically, presenting new formal and conceptual challenges. We have often collaborated with musicians but never in the creative process of writing music. Using the seismic data as our roadmap, we are enchanted to go on this journey with Katherine Young, interpreting the data into the musical score.

Unfortunately, the effects of climate change continue. For example, in Louisiana, the amount of land equivalent to a football field  is lost to rising sea levels every day. With this project we want to create an immersive, multi-sensory experience that helps people connect to the urgency affecting all the beings on our planet. For us, we hope this collaboration and the work that is produced invokes a reaction, even if that is simply understanding the sense of scale for the first time. But perhaps with an increasing scale of response, we may counteract this global issue. 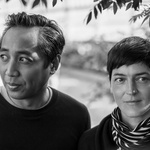 Luftwerk (Petra Bachmaier & Sean Gallero) explores light, color, and perception in immersive, experience-based installations. Focused on the context of a site for each project, Luftwerk applies their own interpretive layer, integrating the physical structure, historical context, and embedded information …