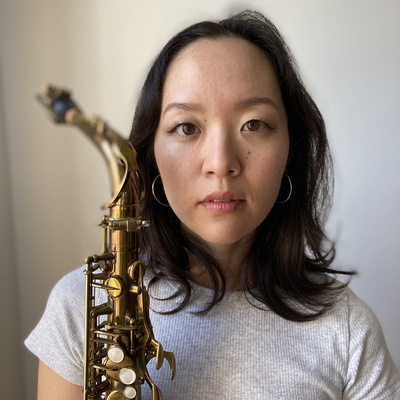 Mai Sugimoto is a saxophonist, composer, and active member of Chicago’s jazz and improvisational music scene. “A compelling performer” with “dry-champagne tone and lyrical lines” (Chicago Tribune), Sugimoto draws inspiration from her upbringing in Japan and her roots in jazz to compose and perform from her unique multicultural experience.

Born/Raised, her debut album (Asian Improv Records, 2018), explores this cultural and musical binary, juxtaposing, among others, a jazz rendition of a Japanese children’s song alongside compositions inspired by the American jazz idiom. Sugimoto is also a core member of the quartet Hanami, whose two albums similarly mix Japanese culture into creative music. Sugimoto has performed three times at the Chicago Jazz Festival: in 2015 with Hanami, in 2019 as a leader, and in 2018 with renowned bassist Tatsu Aoki, with whom she frequently plays, including appearances in his Fred Anderson Legacy Band. Her first solo album, monologue (Asian Improv Records) was released in March 2021.