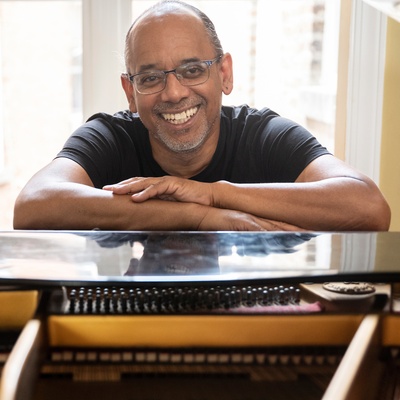 Miguel de la Cerna is the third generation in a distinguished lineage of Chicago piano jazz greats. His grandfather, pianist General Morgan, accompanied and recorded with both Billie Holliday and Henry “Red” Allen, and recording artist Gloria Morgan was de la Cerna’s aunt. After studies at the American Conservatory of Music and Oberlin Conservatory, de la Cerna toured the world for more than a decade as pianist and conductor for various ensembles and theatrical productions before resettling in Chicago. A frequent collaborator with some of the world’s most celebrated jazz masters, de la Cerna’s breadth also spans classical and world music. An accomplished composer, he has been commissioned twice by The Orion Ensemble, and his children’s songs are being featured in the newly released film For The Left Hand. Miguel de la Cerna shapes a new generation of young musicians and singers as Theater Music Director for the University of Chicago Laboratory School and serves as Music Director for the Jazz Institute of Chicago’s JazzCity concert series, bringing jazz and world music to concert venues and neighborhoods throughout Chicagoland.