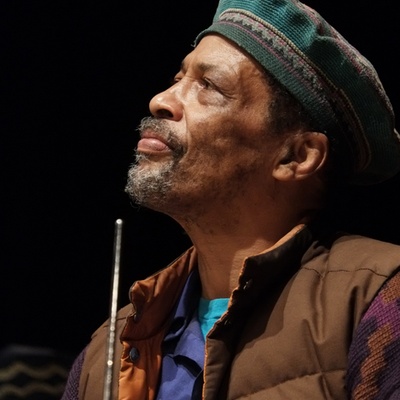 Avreeayl Ra Amen, born Arthur L. O’Neil, has become a local Chicago legend in the richly progressive avant-garde jazz scene over a career that has spanned more than a half a century. His muscular, soul-seeded beats have been described as stirring tempos that drive animated sonic conversations. His boundless versatility refracts an inﬁnite sonic spectrum in the improvisational soundscape he has co-created in the many cultural communities to which he belongs. He has toured nationally and internationally for decades with renowned ensembles led by Sun Ra and Ari Brown and with The Arts Ensemble of Chicago. Other collaborators include Fred Anderson, Amiri Baraka, Fontella Bass, Gary Batrz, Lester Bowie, Oscar Brown, Jr., Sun Ra, Nicole Mitchell, Pharoah Sanders, and Quincy Troope. He became involved with Henry Rucker’s Psychic Research Foundation in the 1960s when he was working with trumpeter Phil Cohran, one of the great, unheralded ﬁgures of African American artistic ingenuity. The lesson that Avreeayl learned from Phil was that of intention—he has always been in some way trying to fuse the two together, the music and the healing.