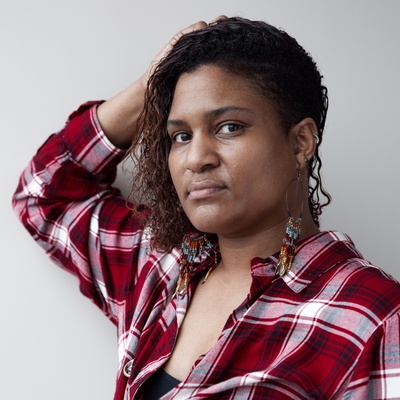 Tanji Harper is a teaching artist and choreographer proud to be from, and still residing on, the South Side of Chicago. Harper was trained by the Joseph Holmes Chicago Dance Theater, Chicago Dance Medium, Homer Bryant, and Joel Hall, and is an alumna of The Chicago Academy of the Arts under the instruction of Anna Paskevska, Winifred Haun, Claire Bataille, Roger Turner, and Randy Duncan. After high school, she trained in both Los Angeles and New York, then started dancing for both R&B and Hip Hop mainstream music acts. Her resume includes R. Kelly, Sparkle, Do or Die, Avant, and Busta Rhymes from 1997 to 1999. After touring and performing all over the country. Harper came home and began teaching in Chicago. She landed a life-changing position that would grow her into the position of artistic director at The Happiness Club and began piloting dance programs that grew into apprenticeships through After School Matters for Chicago Public School teens aged 14-18.

Recently, Harper has put her focus on the young adult gap that is often passed over. The age range of 18-25 is often neglected and still underdeveloped and in need of further assistance to make the necessary adjustments into “adulting.” A constant mentor and seeker of solutions, Harper created Blu Rhythm Chicago, which hosts workshops and performances. During the last 18 years Harper has contributed to curricula, implemented programming, and/or partnered with the Chicago Park District, Chicago Public Schools, After School Matters, The Happiness Club, Redmoon Theater, Dance Chicago, American Rhythm Center, Taste of Chicago, Broadway in Chicago, Young Chicago Authors, Lollapalooza, Lyric Opera of Chicago, and The White House Easter Egg Roll during the Obama administration (2012, 2015, and 2016).