The 312: ‘color Theory': A Real, Live Art Intervention For Englewood 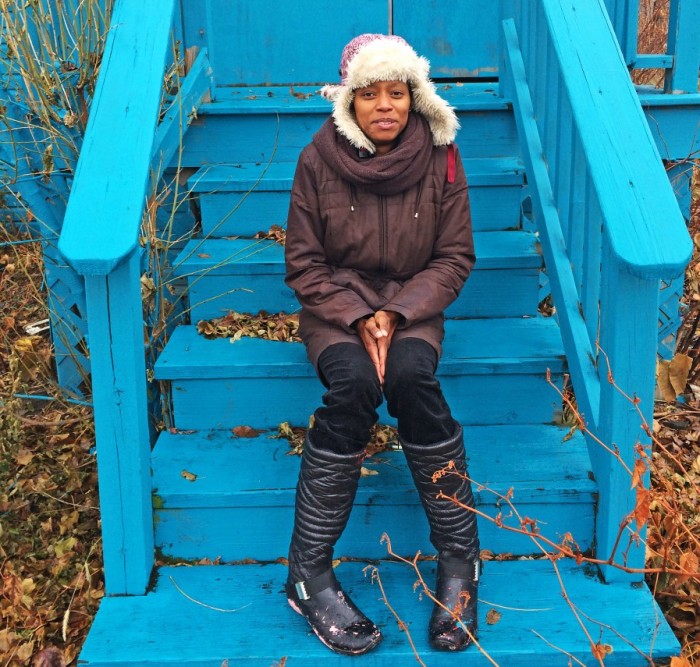 Perhaps you chuckled. If you did, then you’re familiar with the culturally historical colors of Chicago’s black community. And if you’ve noticed that those very colors are popping up on random, abandoned houses on the South Side, then you have artist Amanda Williams to thank for her tongue-in-cheek “color theory.”

“I try to look for houses that are abandoned or also pretty isolated so they are the only thing on the block, or one of a few left on the block and usually the ones slated for demolition, so there’s an immediacy to it — you might come back to it later and it’s gone,” says Williams, 40, who started painting the houses this past summer as part of an art project that seeks to highlight the value of neighborhoods.

Englewood. That’s where three of the houses were located — all along LaSalle Street around the 56th and 57th blocks. Harold’s Chicken Red was demolished, so now there are two houses.

Williams, her husband and their artist friends get scaffolding, paint rollers and anywhere from 10 to 30 gallons of paint to cover, as best they can, houses marked with a big red X. They pick up the trash, cut the grass, trim the hedges, dig up the weeds and tidy things up. No one seems to mind. Or notice. Hardly even the police.

“They drove by one day and gave us the thumbs up,” says the Auburn-Gresham native and IIT architecture and color theory instructor who now lives in Bronzeville. She chuckles. “That was after asking if we were going to steal the copper. I think that everyone thinks if a group of people are out here early on a Sunday morning, painting a house, then we must own it. One woman walking by asked if I worked for the bank. When I told her no, she said ‘well, you ought to get the bank to pay you for painting that house.’ ”

In the summer things looked different, but now the colors are jarring against a wintry landscape of grays, taupes and dark-brown leafless trees.

There is a constant sound, like the ocean, except it’s the traffic on the highway merged with the periodic rumble of the Metra. This block on LaSalle used to be part of a bustling, mostly black-owned business district and community — decades ago — but that was before the government decided to put an expressway through it. Since then, houses on these particular blocks of Englewood have largely fallen into disrepair, leading to demolition, houses with red X’s and empty, open lots with tall, swaying grasses.

It’s a long block that spans 55th, 56th and 57th streets with only one intersection. The Tip Top Bakery used to be on 57th and LaSalle, but it’s long gone. The painted houses, however, are drawing people back to that end of the street, says Steven Jones, who lives nearby.

“It was exciting for me,” Jones says. “It’s not a eyesore any more. Some people park and look, or walk out and look. Why are they painting it if they are gonna knock it down?”

Jones says he tried to figure out who was doing the work, but never did. He thought it might have something to do with plans to rejuvenate Englewood with TIF funds. Adds neighbor Alan Palmer, 58, “It was weird but I like it. It makes you notice the homes and think.”

This project emphasizes the architectural beauty of houses, even abandoned homes,” says Van Eck, a former Museum of Contemporary Art Chicago curator who is now the artistic director of the Edgewater-based art venue 6018north. “By using a single color, [Williams] minimizes the architectural elements to maximize the architectural silhouette. The work is also a poignant sociopolitical and economic exploration of color theory, art, value and housing. If a home can easily lose value, what happens when it becomes a work of art? Does it increase its value? Does the neighborhood increase in value?”

Other artists have forayed into the realm of found objects combined with paint, sculpture, architecture and questions of urban planning, relationship and space.Theaster Gates is one. Mark Bradford is another.

Williams, who already has pieces in the collections at her alma mater, Cornell University, and at Wells Fargo Bank, finds her art houses by driving around and double-checking lists of buildings on the X list. She plans to move to the West Side next. She also recently won a $25,000 unrestricted grant from 3Arts.

“I think there could potentially be a big impact in Chicago,” says Esther Grisham Grimm, the executive director of 3Arts. “The people who see these abandoned, boarded-up homes transformed utterly by these beautiful colors probably do have a moment of pause in re-seeing the houses as homes and not simply walking past them.

“There’s a lot of potential in how we look at what’s been abandoned and what could happen there.”