3Arts Takes It to the Next Level 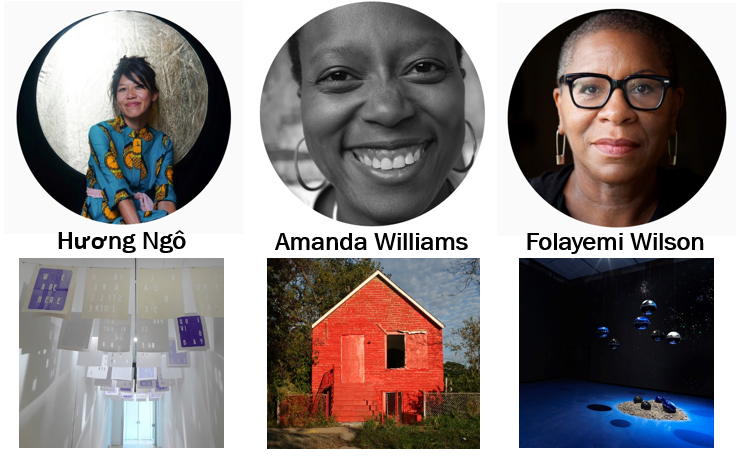 CHICAGO, IL (October 19, 2020)– 3Arts, the Chicago-based nonprofit grantmaking organization, announced the inaugural 3Arts Next Level/Spare Room Award—a $50,000 unrestricted cash award given to three women visual artists who are past awardees—during its 13th annual 3Arts Awards Celebration hosted October 19 via livestream on YouTube. Also announced, and to the surprise of the ten 2020 3Arts Award recipients, was a $5,000 increase to the annual 3Arts Awards, raising their 2020 grant to $30,000 instead of the traditional $25,000. Ten additional artists were awarded $2,000 cash grants through Make a Wave, an artist-to-artist grant program in which past 3Arts Awards recipients select another ten Chicago artists to receive awards. In total, 23 artists received $470,000—making this the largest award year in 3Arts’ history. The virtual event featured 15 commissioned performances by past 3Arts awardees. The 2020 celebration also marked a new tradition of splitting donations with two admired organizations that are part of the ecosystem that supports artists; $30,000 was raised and split among 3Arts, Deeply Rooted Dance Theater, and Jazz Institute of Chicago.

With support from an Anonymous Donor at the Chicago Community Foundation, the inaugural 3Arts Next Level/Spare Room Award was given to visual artists Hương Ngô, Amanda Williams, and Folayemi Wilson in recognition of their outstanding work and continued growth in the visual arts.

“This inaugural program is a unique concept in the grantmaking field in which a second award at a higher level is distributed to a past recipient,” said 3Arts Executive Director Esther Grisham Grimm. “This program reflects our firm belief that once is not enough and that artists thrive with continued investment at critical junctures.”

To further elevate this year’s awards, 3Arts commissioned 15 artists to create new works for the event, including: 2019 awardee Sam Trump (trumpet player, singer) who debuted his music video, “New World”; 2012 awardee Nejla Yatkin who digitally choreographed a dynamic “exquisite-corpse-style” score for dancers, actors, and musicians—each representing the past 12 years of awardees; and 2019 awardee Santiago X, who created a piece to honor Native lands. The entire evening’s celebration is available to view on 3Arts’ YouTube channel at youtube.com/3artschicago.

During the celebration, 3Arts also announced the launch of a new program called 3ER, 3Arts Emergency Response, for the nearly 350 artists in the 3Arts grantee network. This is both an immediate response to the pandemic’s impact on artists and an effort to establish an ongoing fund for artists in any time of personal crisis. With more than $50,000 raised to date, 3Arts will begin distributing swift, short-term relief grants of $500 each to artists experiencing financial hardship as a result of the pandemic.

Hương Ngô [2018 3Arts/Reva & David Logan Foundation Awardee] is an artist born in Hong Kong, often working between France and Vietnam, and now based in Chicago. Having grown up as a refugee in the American South, she engages histories of colonialism and migration, particularly in relationship to language, structures of power, and ideologies. She is currently working on expanding an ongoing project that delves into archival material about indigenous Vietnamese women involved in the anti-colonial movement and connecting Vietnam’s history of colonization with that of the American South. Another series aims to connect the colonial history of Vietnam with that of New Orleans, via the attempts of French colonists to introduce the silk industry to both locations.

“I am so excited about the generative possibilities of these new projects that connect the colonial history of Vietnam with that of the American South and the history of slavery, which I have been wanting to do in my research and practice for a long time,” said Ngô.

Amanda Williams [2014 3Arts/Stan Lipkin & Evelyn Appell Lipkin Awardee] is a visual artist who trained as an architect. Her creative practice employs color as a way to draw attention to the complexities of race, place, and value in cities. The landscapes in which she operates are the visual residue of the invisible policies and forces that have misshapen most inner cities. Williams’ installations, paintings, and works on paper seek to inspire new ways of looking at the familiar and in the process, raise questions about the state of urban space and citizenship in America.

“Oddly enough, this award will have much of the same impact that the 2014 3Arts Award had upon my life and career,” said Williams. “I routinely credit 3Arts with being an affirming force and offering financial support at a magnitude that bolstered my ability to take risks and to make art installations at full scale. This award reminds me that at each level, there is actually not more risk involved, just a different kind of risk and opportunity for growth.”

Folayemi Wilson [2015 3Arts/Allstate Awardee] is an object and image maker whose work celebrates the Black imagination as a technology of resistance and self-determination. Her work explores the Black Atlantic experience though sculptural and multimedia installations presenting speculative fictions that reference history, integrating inspiration from American vernacular architecture, literature and science fiction, using original sculpture, found objects, archival media, sound, and video. Her process utilizes training in art history and critical theory, employing the archive and other research methodologies to mine history for use as material in her creative practice.

“Like in 2015, the Next Level Award can provide affirmation that how I hold my work is important, and resources to move some of my projects and interests forward,” said Wilson. “As well, I dream about planting myself securely in a permanent studio in a building that I own, without having to periodically uproot myself and keep replanting my feet.”

3Arts is a nonprofit organization that advocates for Chicago’s women artists, artists of color, and artists with disabilities who work in the performing, teaching, and visual arts. By providing cash awards, project funding, residency fellowships, professional development, and promotion, 3Arts helps artists take risks, experiment, and build momentum in their careers.

3Arts extends a special thanks to 2020 3Arts Awards Presenting Partner, the Walder Foundation, and to the 2020 Award Partners: The Chandler Family; Gary & Denise Gardner Fund; The HMS Fund; Stan Lipkin & Evelyn Appell Lipkin; The Reva & David Logan Foundation; RH, Restoration Hardware; The SIF Fund at the Chicago Community Foundation; Southwest Airlines; and donors to the 2020 3Arts/Southwest Airlines Community Award. One of the ten 3Arts Awards, designated as the Community Award, is named in honor of the Chicago community. Earlier this year the award was supported by 85 donors who contributed to a crowdfunding campaign plus a $15,000 match from Southwest Airlines. This year’s 3Arts/Southwest Airlines Community Award recipient is Dorian Sylvain, an artist and arts educator born and raised on Chicago’s South Side who has been developing community-led public art and mural projects around the city for more than four decades.