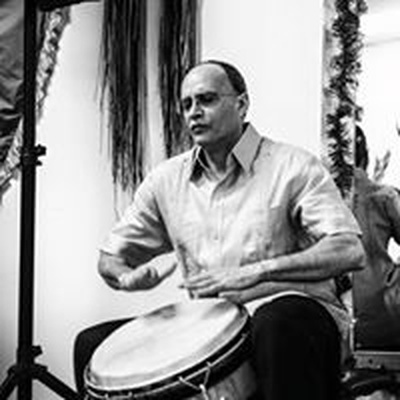 Evaristo "Tito" Rodriguez was born in Chicago of Puerto Rican parents. At age six, he moved with his mother to the town of Dorado in Puerto Rico, where he attended grammar and middle schools. At age 14, Tito returned to Chicago to live with his father in the Humboldt Park Area. While attending Roberto Clemente High School, he helped organize various academic and artistic groups. Under the mentorship of Orlando Jimenez, Tito was encouraged to learn folkloric and traditional music and dances of Puerto Rico and Latin America. For the past 40 years, Tito has been creating, developing, teaching, and promoting Puerto Rican and Latino Culture through different artistic mediums via groups like Ballet Folklórico Herencia Yucayeque, Grupo Yuba, BombAche, and now AfriCaribe. Tito is the founder and director of AfriCaribe which houses a Cultural Center, a music/dance ensemble, an academy, and cultural arts education programs.