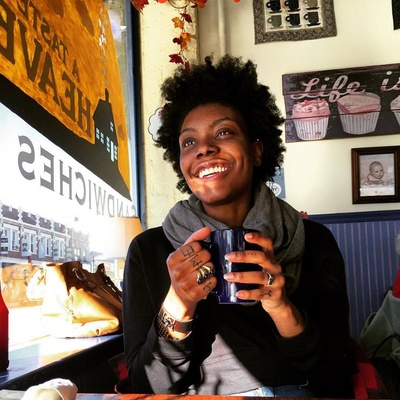 Hell-bent on creating a repertoire that sparked conversations regarding notions of gender, sexual prowess, and race, Jenn Freeman made her debut as burlesque artist Po’Chop in 2010. With over a decade of dance training, including studying at Columbia College Chicago, Po'Chop uses elements of dance, storytelling, and striptease to create performances that are described by Chicago critics as "...the most provocative symbol of might onstage...It was as if Po'Chop had captured lightning in a bottle and the bottle was herself." Since Po's debut she has seared across many US stages, from New Orleans, New York (where she performed at the Brooklyn Museum in Brown Girls Burlesque’s Bodyspeak), and St. Louis. Though any opportunity to perform is met with an indescribable ferocity, Po' relishes and considers being a Jeezy Juke Joint board member and creating and performing. Po’ has been a recipient of the Chances Dances Mark Aguhar Memorial Grant, a participant in the 2016 RDDI Chicago Dance Lab, and a recent Co-MISSIONS resident artist at Links Hall. Needless to say, Po’Chop is the meat, so sweet even vegetarians want to take a bite!