For the first time, I am creating a short dance film that will merge my choreography with poetry, prose, and musical composition. The title of the project refers to a fictional character and moniker of mine, Delinea Renda, which is derived from the words “delineate” and “render,” relating to the articulation of a message inspired by the written form. My own poetry and prose form the basis of the work, the music, and the choreography, which combines modern dance fundamentals and American African diasporic street dance, such as house, popping, waacking, and hip hop. I’m collaborating with Chicago composer, musician, and producer, Josh Luis, as well as sound engineer and producer, Peter Angorola and Melvin Rosario. This is an ambitious work for me, but also deeply inspiring because it is a reassurance that I can and should be experimental and inclusive of all I have to offer as a performance and literary artist. Never before have I danced to my own songwriting, my own voice. The lyrics and the movement will come from the same mind and intention–a rarity for the choreographic process which usually includes submission to music already created. I’ll be able to create a tangible piece of work that is captured specifically for film, rather than documented from a live performance. I’m truly grateful for the chance to create something largely collaborative and beautiful. Funding for Delinea Renda will cover rehearsal space for dancers and musicians, studio recording sessions, cast and crew, equipment rental, costuming, and other costs of production. With the benefit of your support, my plan is to begin production later this year and release the film by Spring 2019.

I was initially inspired to create this dance film after discovering the work of visual artist and writer, Barbara Chase Riboud. I stumbled upon Riboud’s Little Gold Flag at Chicago’s Stony Island Arts Bank. This large, sculptural piece brings graceful movement to its powerful bronze form and creates unique and impressive textures for its medium. What struck me most about Riboud’s work was learning that her other craft of poetry often informed her developing visual art–a practice I share with her in my choreographic and songwriting process. It renewed in me a sense of belonging and wonder and inspired me to try and create a work that is as deeply ethereal as it is strong. My work will tell my story through poetry and prose, as well as provide a seamless visual aid through the language of movement to create a multidimensional, communicative, and immersive experience.

Embodying the character of Delinea Renda, I will be a featured performer as well as the choreographer of all movement. I will be joined by an ensemble of dancers and musicians. The costuming will be inspired by Riboud’s Little Gold Flag and designed to reinforce fluidity and strength. This also aids in creating a depiction of trust that’s necessary in the process of personal storytelling. In trusting my collective to help me tell my personal story, I believe this project will fuel and inspire that possibility with others and eventually aid in creating a storytelling platform for many more people. I’ve never produced a project of this scale. The Chicago art community has been so supportive and encouraging of innovation and unique expression, and that is why it is my chosen creative home. I thank you for granting me the opportunity to experiment and learn about myself through what I create and put out into the world. 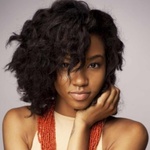 Brittany Harlin is a performing artist with a mission to represent street dance on stage. She is the founding artistic director of Chicago Urban Dance Collective, a 2017 recipient of the Chicago Dancemakers Forum Lab Artist Award, and the …