As a native of coastal Louisiana, I have seen the region and many of its people nearly devastated by natural and manmade disasters but also resilient and powerful in the collective efforts to rebuild and restore. When I left Louisiana for Chicago, I took the passion of that community with me and it is now a major source of inspiration behind my latest project: Relay of Voices: The Great River Run (RELAY). A multifaceted, serialized performance, RELAY is designed to connect people, communities, and the nation—a curative response to the increasing isolation and division within the United States. Over the course of the next two years, I will choreograph a group expedition on foot to gather and share stories from one hundred communities along the Mississippi River’s 2,300 miles. An ambitious project, the first leg in 2018 will be an extensive year-long phase of research conducted between our base in Chicago and sites along the river. We will then apply this research to the culmination of the RELAY project in 2019. Ultimately, RELAY relies on social choreography, whole-body listening, and the use of many bodies and collective movement as a means of storytelling that connects us beyond politics and rhetoric. With your involvement, we will raise the funds necessary to support this research phase which is critical to meet the complexities of this project that we feel will touch hundreds if not thousands in unique and profound ways.

With my company of creative professionals, I am preparing for this project through a wide range of research activities, from mapping the running route along the Mississippi River, to designing specialized hands-on performance exercises, and planning a month-long trip along the river for advanced field research. Along with other major supporters, including the Chicago Dancemakers Forum, this 3AP campaign will play an instrumental role in raising the funds necessary to move this project forward.

During 2018, I need a budget of $5,000 every quarter, which will allow me to employ four movement researchers in monthly fieldwork and studio-based training. I will also use the funds to hire an art historian specializing in performance archives to devise an archive strategy and practice for the project. I will begin a programmatic effort at building momentum behind the project through social media, specifically Instagram. The RELAY team will travel to over five national races that occur along the route to conduct strategic outreach in the running community and get a sense of the landscape before taking it on fully in 2019. Our budget will provide for insurance, printing of promotional materials, technology, and supplies.

The success of RELAY’s culminating 100-day event is contingent on developing a thoroughly researched movement methodology as well as connecting with the 100 local communities in which the event will take place. Here in Chicago the RELAY team will continue a methodical practice of one-on-one shadowing field work and related documentation. The team will begin a three-phase testing period of our collective processing methods and resulting movement stories. Experimental public performances at the Chicago Artists Coalition (May), the MCA Chicago (August), and UIC’s Hull House (November) will invite the Chicago community to participate broadly.

RELAY team members will then be ready to embark on the 2019 expedition along the Mississippi River, spending time with individual residents as a shadow to their everyday lives. The team will document everyday gestures, actions, rhythms, routines, and rituals of their local partner. The team will then rehearse with this material, transforming what was witnessed into movement stories. The next morning the team will rise and invite the community to gather in a public space—a field, a park, a parking lot—where they will share the movement stories as an activity for all to engage. They will serve as both a narrative vehicle and a warm-up exercise for the walk or run that is to follow. Movement stories represent a new mode of storytelling: cultural narratives dependent on the dialogue between a person’s movements and words.

Following the movement stories warm-up, the RELAY team will invite the community to run with them as they collectively run the equivalent of one marathon. The team will conduct their running by relay, a nod to the physical strain of one hundred days of running a 2,300-mile route and an acknowledgment of the multiple voices coming together in this work. By October 7, 2019 the RELAY team will have constructed a vast performance vocabulary, will have shared both intimate and communal performances with one hundred different communities, and will have traversed the entire length of the Great River which seminal historian Frederick Jackson Turner calls “the field, the theatre, and the basis of the civilization of the Western World.”

Over the course of the RELAY the team will travel the length of the Mississippi River, from Minnesota to Louisiana. They will undertake this 2,300-mile adventure on foot to fully appreciate the lived environments that shape those they engage with. I will also use the preliminary research and fieldwork journey to construct the first by-foot trail map of the entire Mississippi. After the field work is complete the resulting documentation of the RELAY, map, movement research, and stories will be used to construct an original online archive for public use. My archive goal is to assert the importance of movement as a critical cultural form and foster a greater appreciation for the built and natural environments that we persist within. 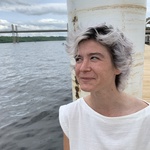 Victoria Bradford Styrbicki (b. 1980) is an artist and cultural producer working across the lines of performance, research, and activism. She currently works as Executive and Artistic Director of A House Unbuilt, a non-profit organization built around radical listening practices, …