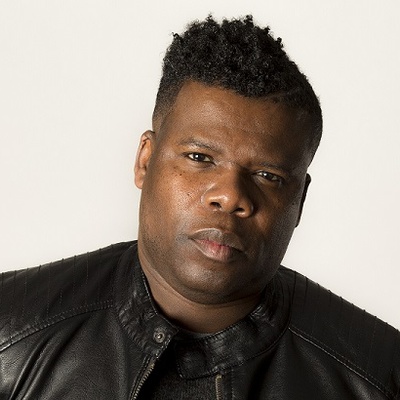 Interdisciplinary artist avery r. young is a 3Arts Award winning teaching artist, composer and producer with work that spans the genres of music, performance, visual arts and literature.  Examining and celebrating Black American history and culture, his work also focuses in the areas of social justice, equity, queer identity, misogyny, and body consciousness. As a writer, this Cave Canem alum has work featured in The Breakbeat Poets, Coon Bidness, to be left with the body, and Make Magazine. He has also written curriculum and essays on arts education that appear in the Teaching Artist Journal and A.I.M. Print.

Dubbed “sunday mornin jook joint,” his performance and work in sound design merges spiritual and secular aesthetics with dramatic and comedic sensibilities. He has performed at the Hip Hop Theater Festival, Wordstock, and Lollapalooza. He has recorded with house producers Anthony Nicholson and Charlie Dark, and is featured on recordings such as New World Reveal-A-Solution, Audio Truism, Catfish Haven’s Devastator, and New Skool Poetiks. His new full-length release, booker t. soltreyne: a race rekkid, features songs and other sound designed created during his artist residency with the University of Chicago's Arts + Public Life initiative.  It was during this residency that he worked on sound design and poems called "cullud sign(s)."

Through voice, sound, visual art, and performance, young is constantly exploring the forms and spaces in which poetry can exist. Most recently, he is the vocalist on flutist Nicole Mitchell’s Mandorla Awakening (FPE Records) and his poetry is featured in photographer and fellow 3Arts awardee Cecil McDonald Jr.’s debut book, In the Company of Black (Candor Arts).

Young’s first book neckbone (Northwestern University Press) will be available in June 2019. He is currently one of four directors for the Floating Museum and touring with his band, avery r. young & de deacon board.

avery r. young has crowd-funded a project with 3AP