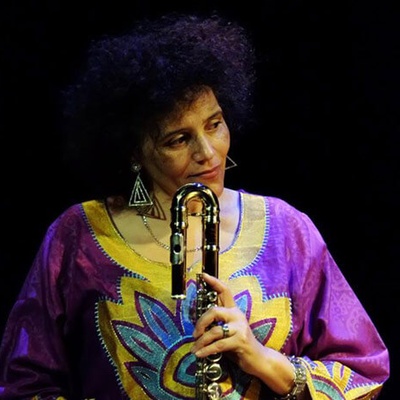 Nicole Mitchell is an award-winning creative flutist, composer, bandleader, and educator. Having emerged from Chicago’s innovative music scene in the late 90s, Mitchell makes music that celebrates contemporary African American culture. Inspired by the idea of bridging the familiar with the unknown, Mitchell has been a highlight at art venues and festivals throughout Europe, the United States, and Canada with her ensembles, as a featured flutist, and as a music educator. Her compositions reach across sound worlds, integrating new ideas with moments in the legacy of jazz, gospel, pop, and African percussion to create a fascinating synthesis of original music. The former first woman president of Chicago’s Association for the Advancement of Creative Musicians (AACM), Mitchell is a recipient of the Herb Alpert Award (2011), the 3Arts Award (2011), and the Doris Duke Artist Award (2012). The founder of Black Earth Ensemble, Mitchell composes for contemporary ensembles of varied instrumentation and size, while incorporating improvisation and a wide aesthetic expression. As a transdisciplinary conceptualist, she has collaborated with choreographers, filmmakers and/or visual artists, and is often inspired by science fiction. She has been commissioned by the French Ministry of Culture, the Chicago Museum of Contemporary Art, the Stone, the French American Jazz Exchange, Chamber Music America, the Chicago Jazz Festival, ICE, and the Chicago Sinfonietta. She is a Professor of Music at the University of California, Irvine.

Nicole Mitchell has crowd-funded a project with 3AP