Focusing on the dance forms of bomba and vogue, I am organizing a creative exchange among Black artists in Chicago and Puerto Rico to learn from and interrogate the ways in which gender and sexuality impact Black diasporic traditions. Our work together will culminate in a series of workshops, panels, and performances in both Chicago and San Juan in summer 2022.

For the past several years I’ve been developing a solo performance titled World After This One, which examines voguing, bomba, and gospel music as examples of Black art forms that repurpose the materials of empire to imagine Black liberation. In learning more about the interconnectedness of these Black diaspora forms, I’ve developed a deep desire not only to honor the creative mentors who have inspired the performance, but also to forge stronger bonds between the communities across the diaspora practicing these radical traditions.

I am teaming up with both local and Puerto Rico-based artists who have been pivotal collaborators in this project, and who are steeped specifically in the traditions of bomba and ballroom. Edrimael Delgado Reyes is an Afro-Boricua voguer and bomba dancer, and founder of Laboratoria Boricua de Vogue in San Juan. Ivelisse Diaz is founder of La Escuelita Bombera de Corazón, a training ground and preservation center for bomba in Chicago. Our plan is to convene these artists first in Chicago in late July, and then again in San Juan in early August.

Through this exchange we will support one another in developing and presenting new work in both Chicago and Puerto Rico, while incorporating political and arts-based education, such as vogue workshops, a discussion on evolving gender roles in bomba, and an introduction to police and prison abolition. Partnering organizations will include La Escuelita Bombera de Corazón, Laboratoria Boricua de Vogue, La Goyco, Espicy Nipples (a Black trans collective on the island), and the list is growing!

By donating to this campaign, you are helping to cover artist fees, travel expenses, and other necessary components of the exchange, but you are also bringing radical new programming to Chicago and Puerto Rico, connecting traditions across the diaspora and fostering relationships between Black artists. No matter your location, there will be panels for you to watch, performances for you to attend, and all manner of ways of participating in and benefiting from this exchange in your own right. The more money we are able to raise, the more events we can offer, and the more artists we can include! 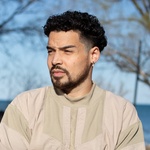 Benji Hart is a Chicago-based author, artist, and educator whose work centers Black radicalism, queer liberation, and prison abolition. Their words have appeared in numerous anthologies, and been published at Time, Teen Vogue, The Advocate, The Funambulist …