This June, I am organizing a week–long visit in Chicago by one of the world’s great Butoh masters, Tadashi Endo. Performing for the first time in the U.S., Tadashi Endo will present IKIRU-Réquiem para Pina Bausch at the Old Town School of Folk Music on June 24, followed by a week of workshops for beginning and advanced students at the Outerspace Studios in Wicker Park. As an active performer and Butoh dancer myself for over ten years, I am passionate about this art form and its continued development within contemporary dance. By founding Butoh Chicago, a marketing platform and event series in the city, I have fostered a growing community of artists interested in this mysterious and mesmerizing dance. With this 3AP campaign, I now have the opportunity to bring this influential performer and teacher to Chicago to share his unique artistry and training with the local community. While I have secured the venue and some support from Old Town School of Folk Music, there are many other costs associated with this project, including travel, accommodations, artist fees, and other expenses. Through other recent successes, I know that Chicago is hungry for more Butoh and that our dance community thrives with engagements such as these. Only with your support will I be able to fully realize this project and continue to bring high-quality Butoh programming to Chicago. Thank you for your support!

One of the major developments in contemporary dance in the latter half of the 20th century, Butoh combines dance, theater, performance art, and influences of traditional Japanese performance to create a unique form that is both controversial and universal in its expression. I am particularly interested in this form that diverges from traditional dance techniques and the many hybrid iterations being taught and experienced around the world. In my own work, I have developed a style of performing and teaching drawn from Butoh, including creating a weekly Butoh Body class, and facilitating numerous workshops and performance opportunities for master-level Butoh artists. In 2014, I organized a free public event called Spawned Seeds: Post-Butoh Festival, supported in part by the Chicago Department of Cultural Affairs and Special Events. The success of that event led to its sequel, SSII: Post-Butoh Festival, which was performed and met with great acclaim this April 2015.

Tadashi Endo, former student of the great butoh dancer Kazuo Ohno, is currently director of the Butoh-Center MAMU and the Butoh-Festivals MAMU, based in Göttingen, Vienna. His repertoire includes No theatre, Kabuki, and Butoh, as well as the traditional forms of Occidental theatre. In his extraordinary dances, Endo expresses the field of tension between Ying and Yang, the male and female, and their ever-lasting alteration. In describing his own work, Endo “uses the suggestive power of concentrated movement phrases to explore the closure of life's cycles. He opens up a space that can be either calming or irritating, and in the experience of which, the observer submerges him-/herself into a world beyond time and words, referred to as MA.”

This opportunity to host Tadashi Endo here, to provide the experience of working and learning from him are united in a desire to change the world—dramatically, poetically, energetically. The classes he offers seek to empower participants to expand their creative process through body awareness. It is no small effort in actualizing this work and this project—it requires intense focus, diligence, and fierce collaborations with artists here in Chicago and from around the world. I am learning every step of the way as I create these opportunities, utilizing my business, communication, and art making skills in tandem. With your support, this visit will be transformative for audiences and artists, and Butoh Chicago will get the spark it needs to thrive well into the future! 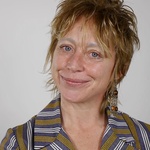 Sara Zalek is a visual artist, choreographer, and curator rooted in Butoh, the avant-garde, and investigations of personal identity. She is obsessed with time travel, experimental science, hybrid animals, permaculture, and the intentional act of transformation. Through Butoh Chicago, Zalek …