Many years in the making, this project will preserve and share traditional musical concepts of Geisha music from Japan, by finishing and distributing a professional CD recording.

This has always been one of the projects I have wanted to finish, but have had a difficult time since it required not only a certain level of commitment from grand masters from Japan but also on the masterly execution.

I have been active in both traditional music and the advancement of Asian American Music in the Chicago area since coming to America in 1977.  I started the “re-construction” of our Geisha house music about 5 years ago. This started out with meeting two Shamisen grand masters from Tokyo. The process began with the collaborative effort of having them learn the music and concepts. It took the three of us about 3 years to learn the songs and become fluent in performing.  I took 3 trips to Japan and the masters also reciprocated with 2 trips to Chicago and San Francisco. Needless to say, these trips were in part supported by my 3Arts Award.

One of my most important goals is to preserve the original essence of fluidity and flexibility and perform the rawness of REAL sound. I always apply this idea to everything I do. From the environment of my childhood, I inherited the historical and traditional essence of the Tokyo entertainment district’s musical concepts, and the basics and value of flexible creations and applications. With the decline of these special districts in the late 60s and early 70s, the musical concepts of Tokyo’s regional entertainment also disappear along with many other art forms that Tokyo geisha music had institutionalized.

I am at the last stage of this important project of Japanese cultural diaspora and aesthetics. I am in need of your help to support and finish this project. The CD has been recorded and partially edited. The $5,000 I am currently trying to raise will cover the costs to finish the editing and mixing of the CD at which point I can have the CD pressed and pay for distribution. In addition, a portion of the funds will help cover some of the costs of the CD release party to be held on July 29.

I was born in 1957 in Tokyo, Japan into an artisan family called TOYOAKIMOTO, traditionally categorized as OKIYA, meaning a booking and training agent for geisha ladies in downtown Tokyo’s designated area. While the economy and social environment forced many of those traditional artisan family businesses to close down in the 1960s, I was fortunately able to receive some of the important essence of traditional Tokyo geisha cultural training and studies at age 4, and became a part of the performing crew in early childhood. After my grandmother passed away, I continued the Tokyo music training until my early teens when I shifted my musical focus to American pop music and experimental music. I was active performer during the early 70s in the midst of the Tokyo underground arts movement.  I also became a member of a Japanese experimental music ensemble called GINTENKAI which presented a mixture of traditional music and new western music. 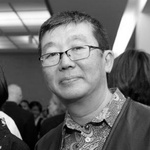 Tatsu Aoki is a prolific artist, composer, musician, educator and a consummate bassist and Shamisen Lute player. Based in Chicago, Aoki works in a wide range of musical genres, ranging from traditional Japanese music, jazz, experimental and creative music.