STRETCH GOAL! Enormous thanks to all who’ve supported this project so far and helped us reach our initial goal in record time! Because of your generosity, we can now aim for a stretch goal of $15,000. These additional funds will ensure that we can bring all our tools and creative energies to this film project, including camera and lighting rentals, hiring professional crew, location travel costs, housing, catering for cast and crew on location, and, of course, paying all of our artists. Your support means the world to us.
As a long-time theater director, I have a deep love for the theater but recently I have developed a great curiosity about also expanding my directing into the realm of film. With this campaign I am seeking the opportunity to enhance my skillset by adapting a play written by Meg Miroshnik into a short film called HANT. Over the last year, Meg and I have been working with our producer, Ty Fanning, to prepare for this campaign which was set to launch in April. Then COVID-19 hit. We have been left with a difficult choice: as so many people are struggling to fund their livelihoods, what does it mean to ask our community to contribute to a dream? As freelance artists in the midst of this current crisis, we have lost the security of our work in the theater and many other industries, and no one knows yet when it will be safe for those to reopen. So, what of our artistry do we have left but our dreams? Making HANT is my dream. In the midst of so much that is devastating or uncertain, I have held tightly onto my desire to bring this short film to life and my desire to bring my vision into a new medium. This will be the launch of my film work, which I can’t wait to share with you and many more audiences when we are safe to gather. Right now I am asking for your help to make this dream a reality by supporting the production and development of HANT. Your contribution will go directly to artists creating work with immediacy and autonomy. Please help us find a place for our art and our artistry in this new reality.

HANT, written by Meg Miroshnik, is inspired by a theatrical piece that she and I developed for the 2016 Humana Festival of New Plays at the Actors Theatre of Louisville. Meg wrote a short play, Bug, as part of an evening of short plays called Wondrous Strange.  In the years since that initial collaboration, the story has stuck with me.

HANT is a story of a woman, Ann Ellis, who has recently come down with a case of “ghost-sickness” and must return to her hometown in search of answers. When she arrives back home, she meets up with a group of her former high school classmates whom she knows can summon the dead. Together, they confront what has been haunting Ann, and discover what will soon haunt them all.

While I’ve wanted to make a short film for a long time, it wasn’t until this collaboration with Meg that I discovered material that I had to immortalize: a piece of the theatrical world that demanded iteration in another medium. I’m thrilled to have both Meg and Ty as collaborators on this adaptation. Additionally, we anticipate bringing together a team of over 20 experienced filmmakers and creatives that will foster the transition of this work to the screen. Once the pandemic clears and it is safe to shoot, we will schedule principle photography to begin at the earliest feasible date. Beyond the support for the artistic vision of this endeavor, this funding will provide paying gigs for artists in the theater and film industries who have been laid-off with no possibility of work over these recent months.

HANT is a piece that asks the question: “what haunts us?” It explores the answer literally, through its ghostly genre, but also metaphorically through characters who cannot let go of their past. We all have things that haunt us. Ghosts may be scary, but what could be more terrifying than ourselves? This piece is a gripping thriller, but also a heart-twisting drama. I am making this film because HANT is a compelling and nuanced story that deserves a wider audience. I am invigorated by the aesthetics of this piece and also its beating, bleeding heart. I feel that I must translate this narrative into a more lasting visual medium. I must champion this story. And someday, in the not too distant future, I must share HANT with you. Thank you for helping us make this dream a reality. 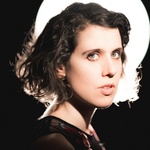 Marti Lyons was most recently directing the world premiere of The Scarlet Letter by Kate Hamill at South Coast Repertory Theatre, which, unfortunately, never had a chance to open. Previous to that, Marti most recently directed How to Defend Yourself by …