The Magic Carpet: A story with music

A new version of a tragic love story, "The Magic Carpet" is a new theatre production set along the Moroccan-Algerian border and centering on contemporary border conflicts through the lens of star-crossed lovers. This is a new work produced by Borderline Theatre Project--a mobile, transnational theatre collective of which I am co-founder and artistic director. We develop new works based on classic stories, myths, legends and oral traditions, and center them around contemporary border conflicts. During my research along the Spanish-Moroccan and Moroccan-Algerian borders, it became clear that the story of star-crossed lovers held particular resonance in this region. Our lives are full of borders, from those that exist between Chicago neighborhoods to the military outposts between Morocco and Algeria. Through storytelling, I aim to uncover and share our common struggles, and our common joys, with people across the world.

While in Morocco as a Fulbright grantee, I came across a rug made with Moroccan patterns, but with Algerian colors. The merchant had no idea from where it came, but that it was something of an anomaly. Traditionally, the bottom of the rug is left open, so that stories and messages can be woven into the bottom of the rug, as time goes on. I brought this rug back to Chicago with me and now this rug is the framing device for our production. Using recorded oral histories from residents of the Moroccan border city of Oujda, I am using my research to develop The Magic Carpet, a new version of the world’s most tragic love story set along the Moroccan-Algerian border.

With the support of 3AP, I hope to produce a staged reading of this piece in late May. Following the reading, and the script workshop process that would accompany it, I plan to return to Morocco in June to conduct a free admission workshop reading of the piece in Oujda, the largest Moroccan city on the Algerian border. The funds I am raising will allow me to pay all of the artists involved with the project a modest stipend, rent the spaces needed, purchase props, and hire a videographer to capture both productions.

I hope you will join us as we weave this new story of love. 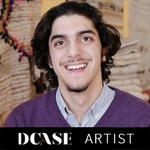 George Bajalia is a Chicago based theatre artist and cultural critic. His research interests lie at the intersection of cultural globalization, identity performance, and transnationalism within the Mediterranean region. Previously he was a Fulbright Scholar in Morocco, where he adapted …