Xochiotia; at El Paseo is an outdoor sculpture project hosted by the El Paseo Community Garden in the Pilsen neighborhood of Chicago. Throughout the summer of 2021, the public will be invited to envision Flower Mountain, a pre-conquest Meso-American afterworld within the community garden. Through building pottery, making incense, participating in guided meditation, and creating monuments for reflection, we will collectively engage in sensorial ritual acts that allow us to enter the flower paradise. Xochiotia will establish a space outside an art gallery for the community to be the central focus.  In this year of so much tragedy, we can turn to Indigenous rituals to understand how death is also part of the natural world’s cycles and find a space to celebrate the lives we lost by remembering their intimate fragrance or texture much like flowers themselves. I have turned to using Indigenous cosmologies and botany to decolonize my approach to living, and, in turn, how we view death. Xochiotia is a project that brings all of those aspects together for the benefit of a community.

During the last year in quarantine, my relationship with artmaking has shifted from looking at the phenomena of violence to creating transcendence out of harm. Over the last five years my practice has been largely performance-based, using martial arts as movement foundation. Studying Muay Thai became such a central focus to the point that I became an amateur fighter and began competing. On March 1, 2020 after losing my second fight, my ego was bruised and I was devastated. I realized that along with my practice of self-defense and strength building, I also needed to have forms of softness and care. This led me to research my own Mexican heritage through indigeneity and pre-conquest Meso-American belief systems to find alternative ideologies outside of Western hegemony. Indigenous mythologies hold powerful lifestyle examples that center natural cycles of rain, evaporation, and agriculture as foundational values.

Within Indigenous Meso-American lineages, specifically Uto-Aztecan cultures, flowers were a source of great power. Flowers were used medicinally, socially, and in rituals. The power of flowers could be harnessed as a blessing or weaponized for battle. Flowers helped to prepare sacral spaces such as sweat lodges designed for community healing or sacred caves used as visionary portals. Floral smells paired with botanic textures were amplified by light and sound. These elements combined to create sensorial fuel for transcendence.

These sensorial spaces became the foundation for a Uto-Aztecan afterlife known as "Flower Mountain," which was depicted through drawings on vessels and tomb walls and evoked through architecture. This mythological afterworld differs from Eurocentric ideas of heaven in that it does not focus on who can and cannot reach paradise through moral hierarchies. Instead, Flower Mountain is accessed through sensorial meditation, dance, light, and incense burning. One can unveil an in-between point where the dead and living can exist together. My project, Xochiotia, follows Flower Mountain by combining sensory elements that allow us to process nature's cycles of birth, death, and transition.

Within the Latinx diaspora, we are continually looking for ways out of colonization. Yet, our relationship with indigeneity is compromised through generations of eradication. I am a third generation Mexican-American without tribal representation, researching my bloodline and looking to mythos for answers to my present challenges. During the pandemic I was able to turn to codexes, research papers, and curanderismo practices around Uto-Aztecan culture to understand how to cope with the state of emergency we were living through. I imagine Xochiotia as a way for communities to mourn those we have lost to COVID-19, assist in the process of decolonization, and shift us out of imperial repression. Xochiotia will give us a place to grieve our loss by using Flower Mountain as an inspiration for sensorial ritual actions celebrating life. 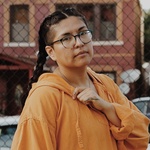 Born in Salt Lake City, Utah and residing in Chicago, Illinois, Marcela Torres mobilizes sound, sweat, and emotional projection to build sensorial performances. These experiences provide a portal into the sensoria of marginalized bodies and are designed to be ingested …