I’m recording my first EP, and I can’t do it on my own! My band, called Yadda Yadda, is planning to release a debut EP of seven original songs honed over the last six years. We make expansive R&B that floats into cloudy harmonies and sinks into heavy grooves. My bandmates have had my back even when getting to and from the gig cost more money than we earned. (Even when the “money we earned” was beer and chicken nuggets, and “getting to and from the gig” meant pushing my mom’s car out of the mud and driving across Wisconsin at 3am.) From the musicians to the engineers, every collaborator on this project is someone I deeply admire. They breathe life into songs that I otherwise might have abandoned years ago—and more to the point, they’re damn good at what they do. Compensating the band for rehearsing and recording this project is one small way of making good on all the work they’ve done and supporting them during COVID. I’m grateful that the expenses for studio time, mixing, and mastering are covered by a 2020 DCASE grant. I originally planned to pay the artists from my own income, but this is no longer possible. The funds raised from 3AP will allow me to fulfill and increase my original (modest) budget for artist fees, including cover art and photo/video documentation.

Music-making, to me, is equal parts journal, playground, and laboratory. It’s a way to untangle personal experiences and a way to world-build through sound. As a bassist and a singer, I like to explore deep feelings and deep grooves. A Yadda Yadda song may make you want to shed a tear or twerk in the mirror, or both.

When I write classical/new music, I strive to open doors for people who wouldn’t normally consider themselves classical listeners: in particular, I want to make music and performances through which young people and people of color can feel that classical music is as much theirs as anyone else’s. Similarly, as a songwriter, I’m inspired by music that pokes holes in standards imposed by cultural or commercial power structures: radio-friendliness isn’t my top priority. Music can be adventurous and accessible at the same time.

I’ve been active in Chicago’s live music scene since 2015, but there are no studio recordings of Yadda Yadda aside from a single I released in college. This EP will represent ten years of songwriting, arranging, and bandleading work. It’s music written over the course of my late teens and twenties, infused with the energy of my brilliant artistic family: a ragtag gang of noisemakers from every corner of Chicago’s music scene. The musicians on the project include drummers Eddie Burns and Akio Jeimusu, guitarist Sam Hasting, violinist Macie Stewart, trumpet player Ben LaMar Gay, and keyboardist Nolan Chin. This summer we’ll gather (in small groups) for the first time since 2019 to rehearse the songs again, finalize the arrangements, and get back into the studio at long last. 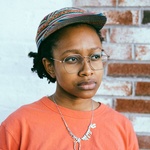 Ayanna Woods is a composer, performer, and bandleader from Chicago. Her music explores the spaces between acoustic and electronic, traditional and esoteric, wildly improvisational and mathematically rigorous. A collaborator across genres and forms, her work spans new music, theater, film …