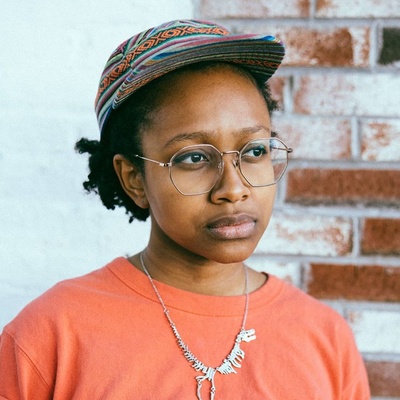 Ayanna Woods is a composer, performer, and bandleader from Chicago. Her music explores the spaces between acoustic and electronic, traditional and esoteric, wildly improvisational and mathematically rigorous. A collaborator across genres and forms, her work spans new music, theater, film scoring, arranging, songwriting, and improvisation. She earned her B.A. in music from Yale University.

Woods has collaborated on projects with Chanticleer, The Crossing, Third Coast Percussion, Manual Cinema, the Chicago Children’s Choir, Chance the Rapper, and her sister Jamila Woods, among others. In 2018, she originated her role as a vocalist in Place, an oratorio about gentrification and displacement co-conceived by Pulitzer Prize finalist Ted Hearne, director Patricia McGregor, and poet/librettist Saul Williams. The album version of Place received two Grammy nominations. Woods is also a sought-after bassist and improvisor in Chicago. As the bassist for the group TASHA, she toured the west coast and performed at Pitchfork Music Festival in 2019.

Ayanna Woods has crowd-funded a project with 3AP