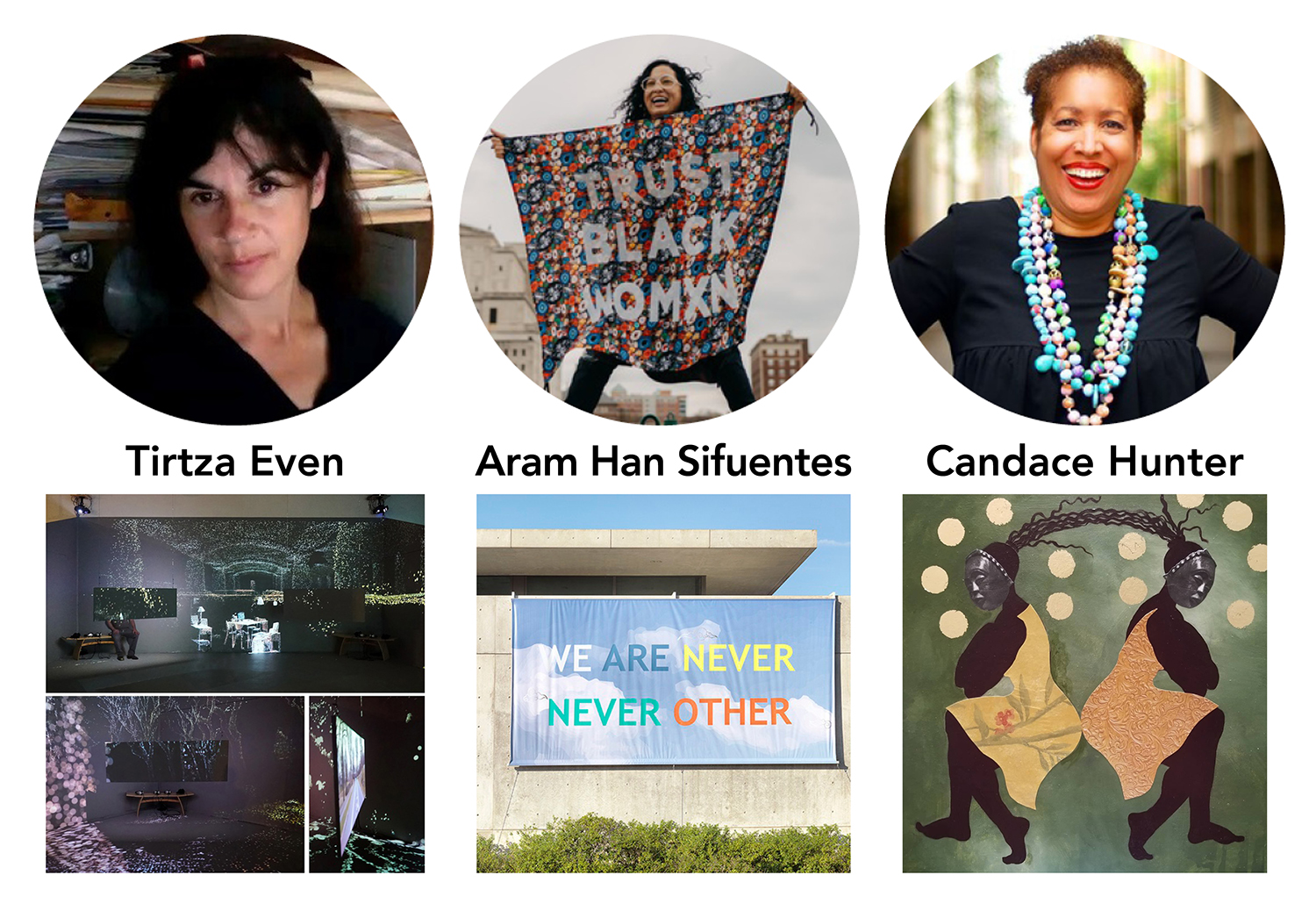 3Arts Goes “Next Level” with second year of $150,000 Next Level/Spare Room Awards to three visual artists

With support from an Anonymous Donor at the Chicago Community Foundation, this year’s 3Arts Next Level/Spare Room Award honors visual artists Tirtza Even, Aram Han Sifuentes, and Candace Hunter, in recognition of their outstanding work in the visual arts.

“The Next Level program is an uncommon concept in the grantmaking field in which a second award at a higher level is distributed to a past recipient,” said 3Arts Executive Director Esther Grisham Grimm. “This program reflects our commitment to investing in the creative heart of our city.”

During the November 1 event, 3Arts awarded 134 artists including ten 3Arts Awards recipients who received $30,000 in unrestricted cash grants. Another 121 artists were selected by past 3Arts awardees to receive $4,000 unrestricted grants through a major expansion of Make a Wave, an artist-to-artist grant program, with one-time support from Make a Wave Presenting Partner The Joyce Foundation. These announcements—together with $230,000 in emergency relief grants given to 3Arts artists in 2021—make this the largest award year in 3Arts history.

Tirtza Even (2017 3Arts/Reva & David Logan Foundation Awardee) An experimental documentary maker for more than twenty years, Even has produced work ranging from feature-length documentaries to multi-channel installations and interactive videos, aiming to depict the less overt manifestations of complex, and at times extreme, social/political dynamics in specific locations like Palestine, Turkey, Spain, the U.S. and Germany, among others. Relying on subtle disruptions of images and sound, and on almost imperceptible digital manipulation of slow and extended moments, Even makes work that elicits signs of underlying human life that might otherwise remain latent or oppressed, but which disorient and interrupt any innocent view of the everyday. Negotiating the sometimes-intense opposition between conflicting truths, bringing to the fore the multiplicity and transience of point(s)-of-view, is an underlying formal as well as ethical and political concern in her documentary projects, which hence straddle the fields of video art and experimental documentary.

“This award will embody a recognition of my current projects' pressing political necessity and artistic value and form a tangible endorsement—and a very real enabling—of the new direction of my practice,” said Even.

Aram Han Sifuentes (2016 3Arts/Stan Lipkin & Evelyn Appell Lipkin Awardee) is a fiber and social practice artist, writer, and educator who works to claim spaces for immigrant and disenfranchised communities. Her work often revolves around skill sharing, specifically sewing techniques, to create multiethnic and intergenerational sewing circles, which become a place for empowerment, subversion, and protest. Solo exhibitions of her work have been shown at the Pulitzer Arts Foundation, Chicago Cultural Center, Jane Addams Hull-House Museum, and Hyde Park Art Center. Her upcoming solo exhibitions include Talking Back to Power: Projects by Aram Han Sifuentes (2022) at the Skirball Cultural Center in Los Angeles and Messages to Authorities (2022) at the Museum of Contemporary Art, Cleveland. Han Sifuentes earned her B.A. in Art and Latin American Studies from the University of California, Berkeley, and her M.F.A. in Fiber and Material Studies from the School of the Art Institute of Chicago.

“For me,” said Han Sifuentes, “going to the next level means fully investing in my dream project: drawing attention to the erased stories of ‘comfort women’ through the creation of open-sourced, 3D-printed monuments as reminders of why sexism, classism, militarism, imperialism, and capitalism hurt womxn, poor people, immigrants, and Black, Indigenous, People of Color.”

Candace Hunter (2016 3Arts/Chandler Family Awardee) creates collage, paintings, installations, and performance art. Through the use of appropriated materials—from magazines, vintage maps, cloth, various re-used materials—she offers the new landscape of materials back to the viewer with a glimpse of history and admiration of the beautiful. Her mixed media artworks are sometimes applause and sometimes rants about the effects of politics and history and a smattering of the now. This personal story-telling is important as an act of meditation and mediation. The untold stories of enslaved peoples, of women fighting for potable water, of children who never made it home for dinner and never would again, of men sitting on death row, and of the abducted daughters of Chibok, are just some of the stories that Hunter yearns to tell visually.

“I would like unfettered time in which to compile and edit my next projects and to have a private studio of my own,” said Hunter. “With the Next Level Award, I will finally be able to have my own space in which to flush out this work and open space in which to dream. Working and dreaming and leveling up!”

3Arts is a nonprofit organization that advocates for Chicago’s women artists, artists of color, and artists with disabilities who work in the performing, teaching, and visual arts. By providing cash awards, project funding, residency fellowships, professional development, and promotion, 3Arts helps artists take risks, experiment, and build momentum in their careers.

3Arts extends special thanks to 2021 3Arts Awards Presenting Partner: The Walder Foundation and to the 2021 Award Partners: The Chandler Family, Gary & Denise Gardner Fund, The HMS Fund, Stan Lipkin & Evelyn Appell Lipkin, The Reva & David Logan Foundation, and The SIF Fund at the Chicago Community Foundation. One of the ten 3Arts Awards, designated as the Community Award, is named in honor of the Chicago community. Earlier this year the award was supported by 93 donors who contributed to a crowdfunding campaign plus a $15,000 match from 2021 Community Award Partner, BMO Harris Bank. This year’s 3Arts/ BMO Harris Bank Community Award recipient is Emily Hooper Lansana, a community builder, storyteller, arts administrator, and educator who, for more than thirty years, has shared her work with audiences throughout Chicago and across the country.