Using interviews and archives, I am writing a memoir about Hale Smith, “the world’s most famous unknown composer.” Hale Smith’s music was recorded and performed by countless luminaries. Readers will laugh, cry, and revel in Hale’s illustrious life in this first official memoir authorized by The Hale Smith Estate.

Many people may not know Hale Smith (1925 – 2009), but he was one of our country’s most prolific composers. If you know John Coltrane, Betty Carter, Dizzy Gillespie, Ahmad Jamal, Kathleen Battle, Jessye Norman, Randy Weston, Melba Liston, Gunther Schuller, Benny Carter, Max Roach, James Levine, and so many others, you know the music of Hale Smith. Musicians who perform and sample Hale Smith’s compositions include a “who’s who” in music.

Those who know him agree, Hale Smith deserves to be a household name. Few musicians fluently write masterpieces as formal music (Ritual & Incantations), informal music (Mountain Oysters), jazz (I love Music), and serialism (Somersault). These four compositions have been performed respectively by Detroit Symphony Orchestra, Major Holley, Eric Dolphy, John Coltrane, and Betty Carter. Somersault, “a 12-tone adventure for concert band,” is a bestseller. Yet too few people know the man behind these iconic works.

As a Hale Smith protégé, I am writing a memoir about his life and work using dialogues from private lessons I had with him, interviews with family and collaborators, and original documents from The Hale Smith Estate. The book will include input from Ahmad Jamal, Melba Liston, Dizzy Gillespie, Jesse Owens—yes, Olympic Gold medalist,—Wynton Marsalis, Abbey Lincoln, T.K. Blue, Cecil Bridgewater, Marilyn Harris, James Newton, NAS, Busta Rhymes, and Dr. Dre.

While Hale Smith is the subject of reputable articles and textbooks, readers will find a broad account of his life and work in this memoir. A reluctant tenured professor at University of Connecticut, Xavier University, and C.W. Post Long Island, Hale favored the format of the memoir for its ability to appeal to musicians and laity, as opposed to an academic hagiography.

Contributions to this campaign will be used to support the costs of hiring an editor, proofreaders, and book designer; manuscript copyrighting; publishing and production costs; website design; and promotions.

Thank you for believing in the greatness of Hale Smith and helping me share Hale’s story with the world. 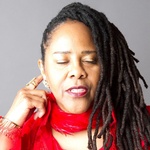 Regina Harris Baiocchi writes notes and words to fill vessels called music, poetry, fiction, and creative nonfiction. Regina is driven by her curiosity to create art that is informed by research, speaks to diverse audiences, and moves people to participate …