As a singer, I’ve always been interested in how the musical voice can be used to convey emotion, make connections, and communicate story. Recently, I’ve been co-developing a new performance work with Kaitlin Foley and Diana Lawrence of Artemisia that will harness the power of the female voice to uncover stories of remarkable women. We’re calling this piece She Was because it revives past and little-known stories of women while it also celebrates the storytellers among us today who are keeping their legacies and influences alive. We will sing these stories to life with a mix of folkloric vocal traditions from around the world as well as arranged and composed music created by our group and four newly commissioned works by living female composers. To creatively accentuate the power of voice in multiple respects, we will pair our group’s live music performance with elements of sound design using recorded interviews, archival footage, and devised writing. We will blend this with a theatrical and staged narrative as we step into the many shoes of women who have come before us. This project has charged us to go bigger than we ever have before, and we feel now is the time to make a creative leap and find ways that music can bring us together again. With your support, we will be able to realize this dream with the hope of premiering the work in Chicago in the 20-21 season.

She Was began much like an archeological dig, inspired by the search for stories about female figures that have been left out of history books. In that process, we found ourselves wondering: Who controls the narrative? What stories are we missing? What would happen in a world where those stories were told?

As a female-forward vocal ensemble committed to putting women’s stories first, we knew we wanted to give those questions life in a newly developed vocal theater production. To represent those stories fully, it was clear to us that we needed to blend the folk traditions of the world that we love to perform with new material devised by a diverse team of female collaborators.

In that spirit, one of our first steps involved reaching out to four songwriters: Rochelle Rice, Hope Littwin, Kyong Mee Choi, and Jess Godwin. We invited each of them to identify a woman who had a meaningful influence on them, but was underrecognized in their view. The women they revealed to us include: fierce feminist and civil rights activist Florynce “Flo” Kennedy; Lady Jae Song (alias), whose tragic life cultivated unexpected strength in the generations who followed her; Doctor Lois, a Chinese doctor who developed preventative medicine inspired by eastern and western traditions; and prolific mountaineer and explorer Gertrude Benham, who climbed over 300 peaks in her lifetime, led by a “spirit of wanderlust.”

Not only were we captivated by these women’s lives, but we found ourselves drawn to the storytellers themselves as they described their inspirations to us not only through their music, but through their language. It was at this moment that we realized She Was would not just uncover the past, but illuminate those that preserve the past: the storytellers.

We also realized that we could harness the digital landscape of today by developing an interactive aspect of this production with audiences and patrons across the globe, no matter the distance. Building on some past successful collaborations, we’re excited to roll out a new online initiative where we’ll invite people submit their own stories of women who have been meaningful to them--quite literally using their own words to describe who “She Was”--and weave those stories into the fold of the show.

While much work has already been done, including completed drafts of our four new commissions, selected biographies, and supporting musical material, we need additional support to fully realize this project. Contributions to this campaign will enable us to hire a team of professionals, including: the sound designer to create audio elements from our archived footage and public submissions; vocal coaches to assist with the many languages and musical traditions in the show; technicians to help with digital streams and distanced performances in advance of a live show; and a staging director to help us get on our feet and bring these women to life in a truthful and authentic way.

Thank you for helping us tell the world who “She Was.” We need her stories now more than ever. 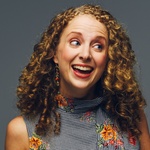