In this evolving world we find ourselves in, I feel compelled to make music because that’s the art form that I feel breaks through barriers and connects us to one another. The Space Between is a new album of songs I’m developing with my band, Anna Soltys and the Familiar. With this campaign we’re hoping to raise funds from our friends and fans to help us produce, release, and promote this full-length recording. This album deals with the vulnerabilities we face every single day that we wake up in this loud and barking world, yet I have a sense of hope. In this breath of musical exploration, we will take each seed and bring it to life with its fullest potential. I can already see and hear the colors that the strings, horns, guest vox, producers, and videographers will bring to this collection of songs! The goal is to turn the ideas into sounds that people will find moving and potentially personally inspiring. Contributions to this campaign will help cover recording, mixing, musicians, videographers, web development, and PR efforts to share the album as far and wide as possible.

Our band, Anna Soltys and the Familiar, formed sometime in 2009. With a series of songs and interest from a label, I pulled in Larry Beers (drummer), and he skillfully recruited in the rest of the Familiar: John Pirrucello (guitar), David Smith (bass), and finally the silent member/producer Rick Barnes. I decided on the band name because each member in the band is a seasoned, uber talented, and abundantly busy performer/artist in the field. Most likely these fellas will look familiar to any regular patron of music in Chicago.

With English being my third language, it took me a while to find comfort as a singer/songwriter at first. But in 2005 I got my first guitar and learned just enough on the instrument to explore the ideas that were driving my creative expression. Music is a magical medium as it speaks multiple languages within itself. You don’t have to speak the language of the vocalist to understand the mood and ideas being conveyed. You also don’t have to be a lead guitar player to create arrangements that speak clearly and deeply.

Being a huge fan of Bob Dylan, Johnny Cash, The Kinks, and Beatles, I became enthralled with how beautifully emotions were transferred to audiences through music. The simplicity of sounds and melody can create a lasting impact and be a powerful force. Music helped me feel connected to something bigger, I might even say it connected me to dreams (not dreams of becoming a musician, these were not thoughts I had then), but dreams of being authentically myself. I believe we all need this now, to tap into ourselves and ways we can be better, more whole, and more unified. Thank you for helping us bring this project to life. 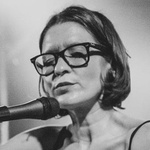 Anna Soltys and the Familiar is a modern folk rock band with an entrancing new sound. Anna spent the first part of her childhood in Poland followed by six years in Paris before moving to her self-proclaimed home, Chicago. It …