FORCE! an opera in three acts

STRETCH GOAL! Thank you to those who've helped me reach my initial goal of $5,000. Every dollar of that initial goal is going to performers and composers over the next several months as we craft the opera. With the time remaining, I’m now aiming to raise an additional $7,500 which will allow me to work with a sound designer and videographer for a more extended period, and continue to pay performers through the filming of FORCE! in 2021. FORCE! an opera in three acts is the story of a group of women and femmes of color waiting to get into a prison and escape a memory-erasing mold. The opera follows archetypal characters found in the liminal space between the visitation room and the parking lot of any prison or jail, personified with names such as: Rage of the World, Who Knows, Down’n Batter’d, and Sorrowful Aimless Love, etc. This project explores what kind of relationships bloom in the shadow of the prison, imagining a strange sisterhood with the power to disintegrate walls. The opera’s cast and crew are entirely BIPOC-identified and majority queer, trans, and/or gender-nonconforming. Making experimental performance work about the feminist potential of the ante-prison with such a cast is not only critical, but powerfully healing. By exploring sound, movement, and dreams with one another we put into practice the free world we have dreamt of. As librettist, choreographer, and director, my goal is to raise funds for collaborator fees and production costs that will result in a video installation (summer 2021) followed by a live premiere (fall 2021).

After three years of teaching dance at Stateville Prison in Illinois and frequent visits with a friend at San Quentin Prison, I found myself reflecting on the relationships of women in the waiting areas. Loved ones are forced into a complex intimacy that is both tied and always resistant to the institution. I began to consider the waiting room—a sociopolitical Black femme space, as theorized by Simone Leigh and others—as a homosocial third space of care, rage, and discomfort in the queer tradition. In conversations with political scientist Cathy Cohen, it occurred to me that all the drama worthy of a good telenovela or classic opera unfolds in a single day within the life of a prison waiting room. Because prisons by nature are improvisational spaces (rules change on a whim, as do efforts to spurn them), I knew this would be no traditional opus. It would need to be a punk opera made in collaboration with highly skilled improvisors of color; queer, trans, and gender non-conforming artists; women and femmes.

As I wrote the libretto, I realized that it was not only a story of those women, but also of my own feelings when I’m in the waiting room. I needed to make characters representative of aspects of the collective energy of that space. The more I tracked my experience in the waiting room, the more I realized that the opera could not be without the ever-present energies of the prison guard and the people we visitors have come to see. It was therefore important to create characters who exist only by way of sound and light, or whose voices are embedded in objects like security cameras – always-present characters without bodies.

Last summer, I formed a ragtag band of queer, trans, femme, Black, and Brown artists during the Creative Exchange Lab at Portland Institute for Contemporary Art. I tried a public version of this jam session in the fall at the Graham Foundation. I saw that the work was also about healing through play, spontaneous creation, and joy. The opera’s cast and crew (the “constellation”) came together, entirely BIPOC-identified and majority queer, trans, and/or gender-nonconforming: Angel Bat Dawid, Jenn Po’Chop Freeman, shawné michaelain holloway, Zach Nicol, Ayanna Woods, Jas Mendoza, Daniella Pruitt, Tramaine Parker, and Phillip Armstrong.

I entered 2020 with a residency at the University of Chicago’s Arts + Public Life to begin playing with the cast and finishing the libretto. With residencies at the Graham Foundation and Saint Benedict the African Catholic Church, we are slated to complete production of a video installation for FORCE! in summer 2021, and as a live performance by fall of that year. During the pandemic, producing a live work is an unsteady process without a clear roadmap. But FORCE! must be made. Thank you for donating, for believing in this work, and for joining with me and the constellation as we dream new worlds together. 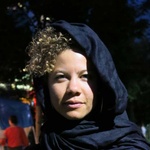 Anna Martine Whitehead does performances. She has been presented by venues including the Museum of Contemporary Art in Chicago; San José Museum of Art; Velocity Dance Center; Chicago Cultural Center; Links Hall; AUNTS; and Yerba Buena Center for the Arts. She …